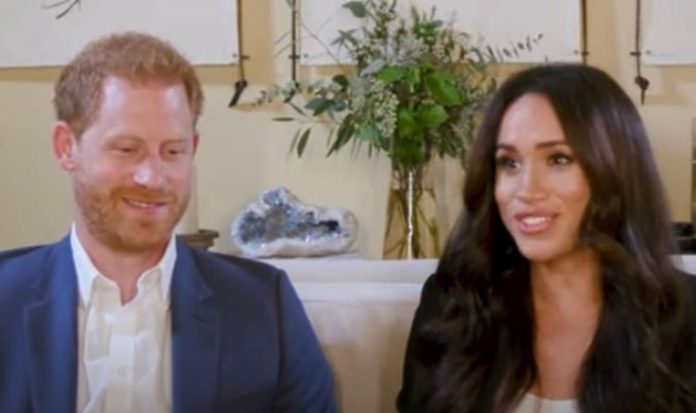 The Duke and Duchess of Sussex appeared together in their latest Time100 video from their home in Montecito to speak about improving the digital world. They came together with experts in the field including Reddit founder Alexis Ohanian, as well as advocates, online creators and journalists, to discuss the issue. Online fashionista Sarah Bradbury joined a royal podcast last week to discuss the couple’s outfits but could not help commenting on the incredible body language between the two.

She described how both Meghan and Harry looked happy and comfortable in each other’s presence.

Ms Bradbury also noted how Harry has started taking a step back and letting Meghan do more of the talking.

She argued that this may indicate that the couple are established enough that he does not need to “hold her hand” in the same way a partner does when they are first introducing their significant other to the world.

It may also be related to the fact that they have stepped out of his comfort zone ‒ the UK and the Royal Family and into her world ‒ California and show business.

Meghan and Harry discussed the state of the digital world in their video (Image: Time100)

Meghan Markle interviewed Alexis Ohanian on her own (Image: Time100)

Last week, Ms Bradbury featured on the show to give her insight into the latest royal news.

Ms Bradbury said: “I just think their body language, they both looked so happy and comfortable.

“And maybe he’s taking a step back for a change, like when you introduce a new boyfriend you very much have to hold his hand.

Meghan Markle and Prince Harry on one of their last royal engagements (Image: GETTY)

“But for once maybe he’s saying ‘you have your time, you do this, I’ve done enough, maybe this is your country, you do what you want and I’ll come in when I need to.’”

However, this is not the only analysis she had of the video however.

Ms Bradbury commented on how quickly Meghan’s hair has grown, and how she wore Kate Middleton’s favourite designer label.

She said: “I would like to know what supplements she’s taking for her hair, because for me, I feel like it’s grown about half a metre in about three months.

Meghan addressed the killing of George Floyd in one of her first videos after moving to the US (Image: ET)

She added that Meghan wore an Alexander McQueen wool blazer and looked “amazing” in it.

Alexander McQueen is Kate’s favourite label and even had her amazing wedding dress designed by the brand.

What’s more, Kate was spotted out in a red ankle-length Alexander McQueen coat at a recent engagement with Prince William.

Ms Gripper commented that the coat paired with Kate’s face mask reminded her of the dystopian book and TV show The Handmaid’s Tale.

She said: “It reminded me a little bit of The Handmaid’s Tale because she’s got this white-looking mask on.

“It’s just because The Handmaid’s Tale has been so effective that when you see something long and red and floor-length and sort of winey-coloured ‒ wine like you drink, not whine like complaining about stuff…

“And it was because she had this white mask on as well ‒ I don’t know what you call it in The Handmaid’s Tale ‒ the whimple thing was on back to front on her face like a mask.

“So I did like it, but it did make me think a bit Handmaid’s Tale, probably because it was full length I think.”