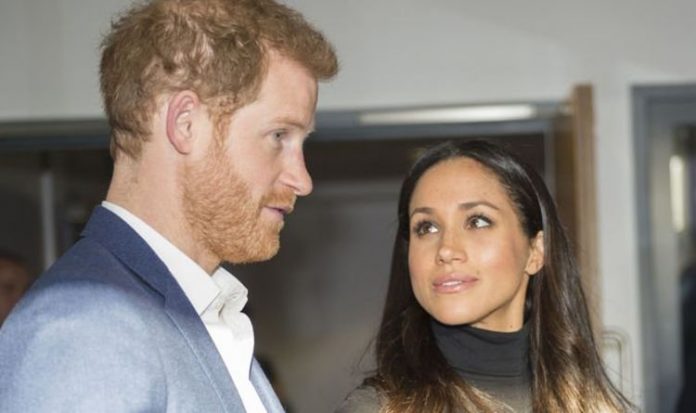 David Kurten, a member of the London Assembly, said Meghan Markle, Prince Harry and his uncle Prince Andrew should be stripped of their titles because the counties they represent “deserve better”. But fans of the royal couple said they simply “followed their heart” following their sensational decision to quit the Royal Family and move to LA earlier this year.

Mr Kurten sparked fury when he posted on Twitter: “Prince Andrew, Harry and Meghan Markle should have their titles as Duke of York, and the Duke and Duchess of Sussex removed.

“The City of York and the County of Sussex deserve better.”

But royal fans hit back in defence, with one saying: “It’s a bit premature to remove anyones titles.”

Another said: “Wow! Bit harsh to compare this poor couple with someone like the likes of Prince Andrew. The hatred is real from racists royal groupies.”

One posted: “grrr l just wish for once people would give them a break, Harry and Meghan went with their heart n wanted to protect their family.”

Another Facebook commentator said: “Harry and Meghan they have done what their heart told them to do save their family.”

READ MORE:  Meghan Markle ‘too busy’ to worry she’s ‘missing out’ on Balmoral

But others weren’t so supportive on Facebook and agreed with Mr Kurten, with one saying: “I agree remove titles from Harry, he walked away from his Royal duties.”

Another said: “l’ll vote 4 that. He has turned his back on our country but still wants some of the royal trimmings.”

One added: “What have they done for Sussex?

“What charities do they support in UK? NONE. Both should have their Sussex title removed.

“Their life now is in America and just call me Harry is welcome to it.. Me again will have all her plans backfire on her.”

The Duke and Duchess of Sussex made the bombshell decision to step down as senior royals at the start of this year.

Meghan and Prince Harry are now living in LA with their son Archie Harrison after stepping away from the royal spotlight.

The Queen has always made it clear the door will always be open for the couple to return to the fold.

Prince Andrew continues to be a senior royal but in mid-November last year, the Queen’s son announced he would step back from public duties for the time being.