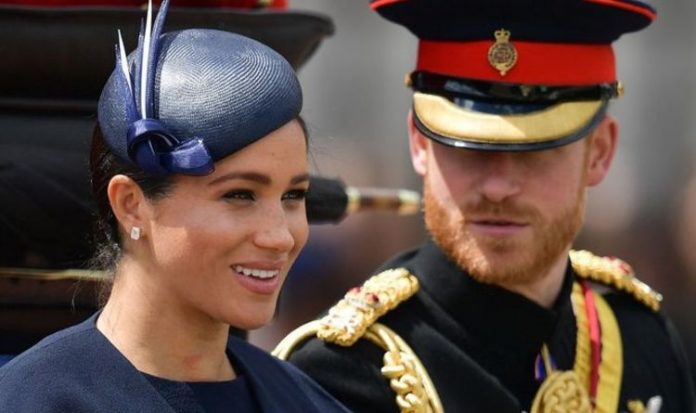 The Duke and Duchess of Sussex shared the news alongside an image of themselves resting beneath a tree in a loving gaze. Harry has his hand placed on Meghan’s head as she lays in his lap, cradling the bump.

The exciting Valentine’s Day reveal falls 37 years to the day Princess Diana revealed she was pregnant with Harry.

On February 14, 1984 the Daily Express carried a front page story titled “Valentine’s Day joy for Charles and Diana. Smile that says it all.”

Seven months after the news broke, the Princess of Wales gave birth to her second son at St Mary’s Hospital in Paddington.

Coral is offering early 10-1 odds on the couple naming Archie’s younger sibling, if a girl, Diana.

Thomas is the favourite name if it’s a boy – which is also the name of Meghan’s father.

Elizabeth, Albert and Philip are also listed as potential names.

At 25-1, the name Doria is listed. Meghan’s mother is named Doria Ragland.

Betfair spokesperson Sam Rosbottom said: “Having picked Archie – a name that wasn’t even on our list, for their first child – the odds suggest Meghan and Prince Harry could opt for a more traditional name for their second with Oliver and Diana the joint 8/1 favourites with Betfair.

“Other names with royal connections are also towards the top of the betting including Arthur and Grace, both at 10-1, and Philip, Albert, George and Isabella all at 12-1.”

Meghan suffered a miscarriage in July 2020, revealed in a moving piece for The New York Times.

The 39-year-old described it as “an almost unbearable grief”.