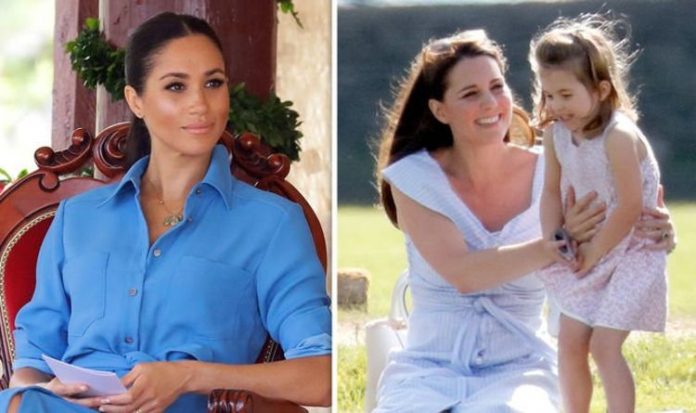 Meghan Markle and Prince Harry divided opinion with their decision to step down from the Royal Family in January. While some credit the couple for forging their own path, recently securing major deals with Spotify and Netflix, others argue they have let down the Firm. The way Meghan, in particular, has been targeted on social media is clear for all to see. One such example came when Princess Charlotte turned four years old.

Posting the photographs on Instagram, the Duke and Duchess of Cambridge’s social media channel said the royal couple were “very pleased to share three new photographs of Princess Charlotte ahead of her fourth birthday”.

As is normal with pictures of Charlotte ‒ and brothers Prince George and Prince Louis ‒ the photographs were taken by Kate.

As Charlotte’s aunt and uncle, Meghan and Harry were quick to wish her happy birthday through what was then their official Instagram account ‒ Sussex Royal.

This happy post was torn apart by some observers, despite the clear and obvious intention to wish Charlotte well.

One royal watcher wrote: “Even on Kensington Royal she is referred to as Princess Charlotte.

“Meghan is just being disrespectful like she was to Prince Louis.”

This refers to a previous post where, again, the Sussexes chose to refer to Kate and William’s youngest son as Louis, rather than using his full title.

Another wrote: “Even if they are related through Harry, she needs to call her Princess if other royals call her that. This isn’t because they’re related, it’s respect.”

Meghan and Harry are no strangers to being targeted online, though.

This year they have worked on a series of virtual engagements in which they discussed the negative impact of the Internet and social media on people’s wellbeing.

Harry believes there is a “crisis” of hate, health and misinformation online and has devoted time and effort to improving the digital environment.

Analysis by Hope Not Hate found that Meghan was the subject of 5,200 hateful tweets in just two months, with 70 percent coming from 20 accounts.

Some of these tweets contained vile sexist and racist language.

As far back as November 2016, the couple called out the “outright sexism and racism of social media trolls” in a Palace statement.

Who is Princess Charlotte? (Image: DX)

In June, they supported a Facebook boycott, encouraging companies not to advertise with the social media giant.

This was to force it to strengthen its policy on hate, abuse and misinformation on its platform.

On National Voter Registration Day last month, the couple took part in a TIME100 video, encouraging US citizens to vote.

In the same video they brought up the topic of the online world, with Meghan saying: “What we are exposed to online seeps into how we engage with each other offline.

This theme is likely to feature in their projects with Netflix and Spotify, too.

During the trailer for their new podcast series, Meghan and Harry explained that it intends to “uplift and entertain audiences around the world”.

Harry said: “So many people have been through so much pain this year.

“Experiencing loss, and a huge amount of uncertainty, but it feels worth acknowledging that 2020 has connected us in ways we never could have imagined through endless acts of compassion and kindness.”

The first episode will be a Christmas special and is set to drop this month.