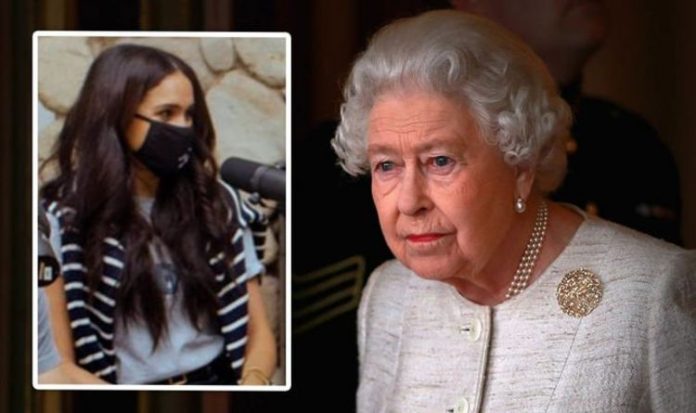 Meghan appears to have worn a face covering and statement t-shirt homaging late US Supreme Court judge Ruth Bader Ginsburg while recording the episode of a podcast released yesterday. The Duke and Duchess of Sussex were pictured sitting on a white sofa opposite to their three interviewers.

In the snap released yesterday alongside the 30-minute episode of Teenager Therapy, Meghan is donning a grey t-shirt, blue jeans, dark heels and a striped blue and white cardigan on her shoulder.

The t-shirt, royal fashion watcher ‘UFO no more’ believes, is bearing the letters RBG – an abbreviation often used on social media to refer to Justice Ginsburg, which she had eventually embraced herself.

The black face masks seemingly had embroidered the words “when there are nine”.

This sentence references to a quote by Justice Ginsburg highlighting the gender disparity within the Supreme Court in Washington.

Meghan Markle is believed to have paid tribute to Justice Ginsburg with her outfit (Image: TEENAGER THERAPY/GETTY)

She famously said: “When I’m sometimes asked when will there be enough [women on the Supreme Court] and I say, ‘When there are nine,’ people are shocked.

“But there’d been nine men, and nobody’s ever raised a question about that.”

Justice Ginsburg was nominated by US President Bill Clinton, becoming the second woman to ever serve on the court.

The justice, who died in mid-September, became throughout the years a feminist symbol as well as a representative of the more liberal wing of the Court.

Her death opened a bitter debate in the US politics, with Democrats demanding the US President to wait after the election to fill the seat she left vacant.

Meghan’s apparent decision to pay her respects to Justice Ginsburg has been read as a way the Sussexes are further distancing themselves from the apolitical stance of the House of Windsor.

Canadian royal expert Patricia Treble wrote on Twitter: “Wearing a RBG t-shirt is another sign of how Meghan and Harry are forging their own path, away from the apolitical Royal Family”.

The Duke and Duchess of Sussex took part in the candid podcast usually hosted by five seniors at a California high school.

Their podcast usually focuses on mental health, with the teenagers touching upon sexuality, families, death and other topics.

Speaking to the royals, the three teens asked Meghan and Harry how they cope with the pressure, online trolls and parenthood during a pandemic.

Both Meghan and Harry highlighted the importance of reaching out to others and be interested in how they are.

The Duke, who famously opened up on his own mental wellbeing on the 20th anniversary of Princess Diana’s death, also said he has chosen to leave negativity out of his day-to-day life as much as possible.

He said: “I think it’s very easy to be sucked in and consumed by negativity, but we all have the choice to be able to cut that out of our lives.

“Hate following has become a thing, you don’t need to do that.

“Just as much as we worry about, be concerned, and take notice of what we put in our bellies as a diet, the same applies for our eyes and our mind, what we’re consuming is affecting us.

“For me, I made the choice not to read it, not to see it, and to remove myself from that, and to very much focus on the uplifting and the hopeful side.”