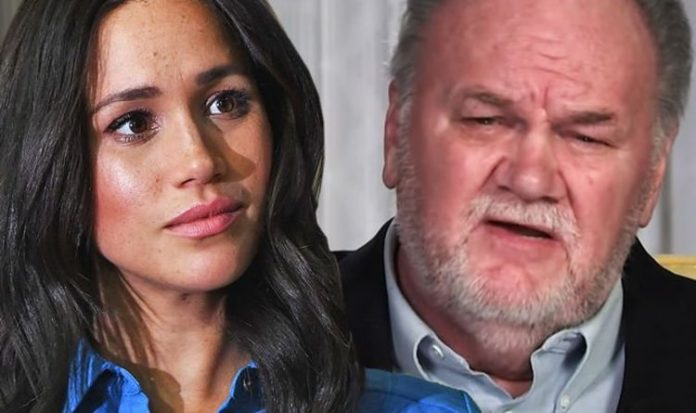 Meghan Markle, 39, is suing Associated Newspapers Ltd (ANL), publisher of the Mail On Sunday and MailOnline, over an article which reproduced parts of the handwritten letter sent to Thomas Markle, 76, in August 2018. ITV royal correspondent Chris Ship has since discussed how Mr Markle plans to appear in court. Speaking on ITV’s Royal Rota, producer Lizzie Robinson said: “There was a statement from her father, Thomas Markle, read out.

“It said how the case is causing him anxiety and he wants to get it over as quickly as possible.

“He talked about how he continues to feel misrepresented and he is planning to travel to London to give evidence in person to give his side of the story.”

Mr Ship added: “The other part of the story is he might not be doing it at all because Meghan has applied for a summary judgment application.

“It’s been granted which means they’re going to test whether or not this case can be heard on a summary basis.

READ MORE: Prince Harry: Duke to lose titles to sneior royal ‘He made a decision!

“If it’s heard on a summary basis, it’ll mean that will be no trail at all.

“It just means the facts of law will be put out in front of the judge.

“There will be no witnesses, Meghan’s anonymous friends won’t be called, Meghan herself and Prince Harry won’t be there.”

At a High Court hearing in London on Thursday, attended remotely by lawyers and members of the press, Mr Justice Warby agreed to adjourn the trial – which was due to start on January 11 next year – until the autumn following an earlier private hearing.

However, ANL’s lawyers did ask the judge to consider Mr Markle’s situation, saying he is “elderly and sick” and wants and intends to give evidence at trial.

In a witness statement before the court, ANL’s group editorial legal director Liz Hartley said she had spoken to Mr Markle and provided a summary of what he told her.

He said: “This case is causing me anxiety and I want to get it over with as quickly as possible.”

Mr Markle told Ms Hartley he has a number of serious health conditions before adding: “None of my relatives has ever lived beyond 80 years of age.

“I am a realist and I could die tomorrow. The sooner this case takes place the better.”

Ms Hartley said in her statement that Mr Markle had contacted a Mail on Sunday journalist because he “considered that he had a right to tell his side of the story following the publication of what he considered to be a misleading article in People magazine”.

She added: “He continues to feel that he has been misrepresented and that the claimant should not be pursuing this claim.

“He is anxious that he should have his day in court so that he can tell the truth in public, have his evidence tested under cross-examination and defend himself against the suggestion that he breached the claimant’s privacy without any reasonable justification.