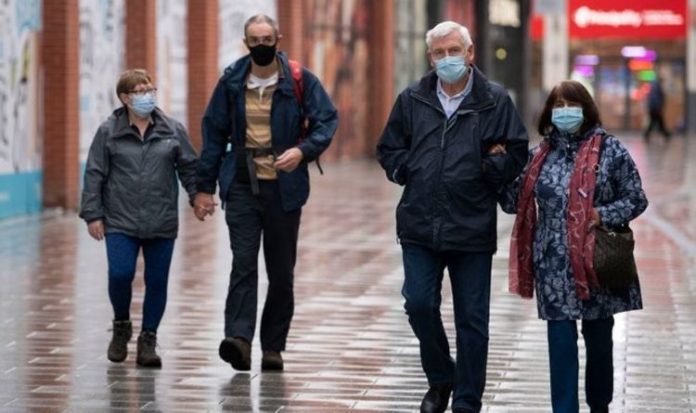 The Government has changed its guidance in England and urged those in their 60s to be “especially careful” – advice which was only previously given to those over the age of 70. The Government has now classed “clinically vulnerable” people as those aged 60 and over. As well as those under 60-years-olds with an underlying health condition including chronic diseases, respiratory diseases like asthma, and pregnant and overweight people.

Vulnerable groups who fall into this category should “continue to wash your hands carefully and more frequently than usual”, and “maintain thorough cleaning of frequently touched areas in your home and/or workspace”.

The new guidance says: “If you are clinically vulnerable, or over the age of 60, you should be especially careful to follow the rules and minimise your contacts with others.”

The Prime Minister’s spokesman added: “The over 60s should take extra care because there is evidence they could be at greater risk of becoming seriously ill.

“The scientific advice is that people in the over 60 age group do have a higher risk of becoming more unwell with coronavirus, so they should take extra precaution.”

Although the guidelines have been extended they do not overlap with those who are in the highest risk group, the “clinically extremely vulnerable”.

These are the most vulnerable members of society, made up of more than two million people, who were forced to shield in March and April.

Prime Minister Boris Johnson and England’s chief medical officer Chris Whitty confirmed shielding, where people were told not to leave home for any reason, will not be introduced this time.

Upon the announcement of the new lockdown on Saturday, Professor Whitty stressed the group did, however, need to take “extra precautions”.

He explained shielding would not be implemented this winter due to people having “significant problems with loneliness and feeling completely cut off from society”.

Mr Johnson added: “I know how tough shielding was and we will not ask people to shield again in the same way.

“But we are asking those who are clinically extremely vulnerable to minimise their contact with others and not to go to work if they are able to work from home.”

Age UK Director Caroline Abrahams has welcomed the change in guidance but questioned whether enough support was being provided.

He said: “While the prevalence of the virus is worse in parts of the North, the doubling time in the South East and the Midlands is now faster than in the North West.

“Even in the South West, where incidence remains low, current projections mean they will start to run out of hospital capacity in a matter of weeks.

“And the modelling presented by our scientists suggests that without action we could see up to twice as many deaths over the winter as we saw in the first wave.”

Mr Johnson added there is “no alternative but to take further action at a national level”.