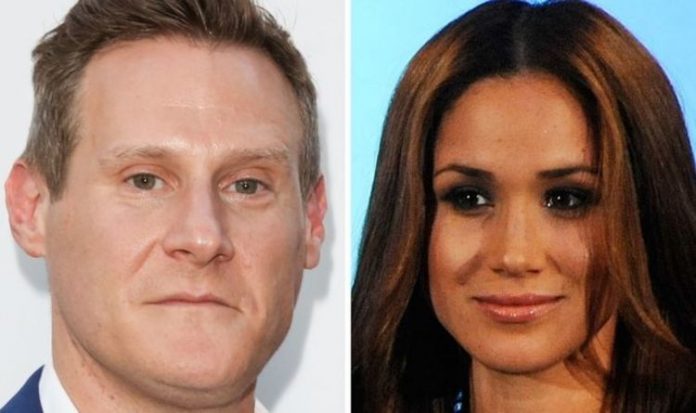 Meghan and Prince Harry married nearly three years ago. In what was a grand affair at Windsor Castle, the pair wedded in front of nearly 20 million people who arrived in person and tuned in from around the world. While the day was a first for Harry, Meghan already had a dress rehearsal for the occasion under her belt.

Years before, in September 2011, in a much smaller but equally luxurious wedding on a beachfront in Jamaica, Meghan married the American actor and producer, Trevor Engelson.

The pair first met in 2004 and had dated for around six years before tying the knot in front of 107 guests.

Yet, less than two years in, Meghan and Engelson divorced, in August 2013.

The relationship faltered due to Meghan’s work commitments to filming Suits in Toronto, while Engelson had to stay in LA for work, according to .

Royal wedding: Meghan and Harry’s 2018 wedding was one of the biggest royal events to date (Image: GETTY)

Early on in their relationship, in 2006, Engelson suffered a monumental disaster in attempting to break into the industry with the film ‘Zoom’.

It flopped at the Box Office and was scolded by critics as one of the worst flicks of the year.

A family superhero adventure comedy, based on the book, ‘Amazing Adventures from Zoom’s Academy’, the film earned £9million on a £75million budget, with Engelson its executive producer.

The film’s star, Tim Allen, even came away with a Razzie Award nomination for Worst Actor.

JUST IN: Kamala Harris ‘poised to join Meghan and Harry on Archewell podcast’

Trevor Engelson: Meghan and Engelson met in 2004 and began dating in 2006 (Image: GETTY)

Andrew Morton, in his 2018 book, ‘Meghan: A Hollywood Princess’, wrote of how the failure encompassed Engelson.

He said: “While Meghan was slowly but steadily chugging along, Trevor went from boom to bust.

READ  Andrea Coscelli: Ahead of the curve - Bannerman Competition Lecture

“Zoom, which was released in the summer of 2006, proved an unmitigated disaster.

“The family action film, described as a dull and laugh-free affair, received a three percent rating on Rotten Tomatoes.”

Hollywood: The pair eventually split due to their existing work commitments (Image: GETTY)

Megxit: Meghan and Harry visit the Canadian Embassy in London ahead of their January 2020 move (Image: GETTY)

On Metacritic, the film has a score of 26 out of 100, indicating “generally unfavourable reviews”, while Rotten Tomatoes describes it as “lacking the punch and good cheer of The Incredibles and Sky High”.

Engelson bounced back, however, with an ABC Family Original Movie called ‘Santa Baby’.

This was met with warmer reviews, including from the LA Times and New York Times, who both said it was a “charming film”.

Engelson wasn’t alone in his struggle, as Meghan also grappled with the rungs of Hollywood.

Royal romance: The pair have been married for nearly three years (Image: GETTY)

As Mr Morton noted: “It was not much better for Meghan.

“The daily rejections would have broken someone with less grit but Meghan knew it was a numbers game.

“As girls dropped out and headed home defeated, the greater her chance of booking something came.”

Engelson has since married Tracey Kurland, an “heiress worth £150million”.

Their wedding was described as “low-key” and took place five months after Meghan and Harry’s, in California.