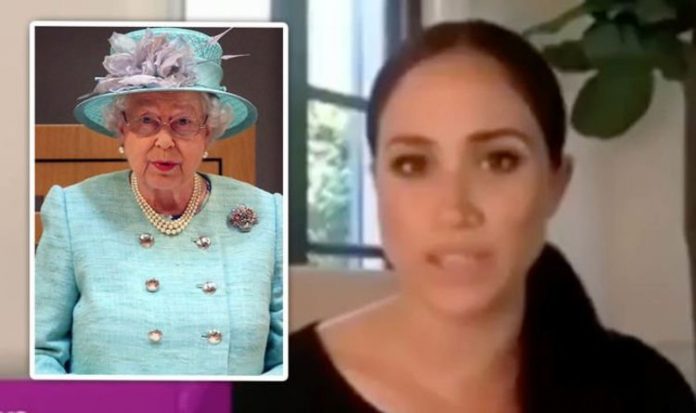 Meghan, Duchess of Sussex, has been accused by some royal fans and commentators, including Piers Morgan, of breaking royal protocol by engaging in politics in recent weeks. Some even called for her to be stripped of her title as the Duchess of Sussex, or removed from her role at the Queen’s Commonwealth Trust.

However, fans have now defended her after royal correspondent Omid Scobie pointed out the Queen also once issued a plea to vote to Welsh people in 2003.

This pushed several fans of Meghan and Prince Harry to joke about the Queen being stripped of her title.

Twitter user Marie wrote: “Piers says ‘Hey Queen strip Meghan of her title for asking Americans to vote’ but Queen did it too.. so… strip her of her title Queen… uh oh oh.”

Social media user U Brought shine added: “Looks like she needs to be stripped too”.

And Twitter user Soon To Be Called GiGi added: “Does this mean the Queen needs to strip herself of her titles? Just asking for Piers…”

Other royal fans of the Sussexes simply said Meghan would simply be exercising her right as US citizen if she voted in November’s election.

Erikk_The_Dane wrote on Twitter: “As a responsible American citizen Meghan has the right to vote and the freedom to encourage others to use their voices by doing their civic duty to vote in the November elections.

“Meghan’s on the right side of history.

“And I hope that she’ll continue living her life as she sees fit.”

However, other Twitter users pointed out the key differences they noticed between Meghan’s latest speech on voting in the upcoming US elections and the Queen’s appeal to Welsh voters in 2003.

LadyDelishOz tweeted: “As it was an election in the UK, HMTQ was well within her rights to encourage people to vote, but not who for.

“After public statements on her dislike for Trump, Meghan isn’t just encouraging people to vote, its previously inferred who it wants the votes for.

“And a Duchess doesn’t have the same rights as HER MAJESTY THE QUEEN, whom the Duchess is representing.

“Convince it to drop those racist, colonial titles and it can warble all it wants on international politics.”

Twitter user Glyn Atherton said: “This is a little different than a royal interfering in another countries voting system.

“This is a monarch, urging her subjects to embrace the democratic process.

“Yes, Meghan is American but the Crown cannot be involved in foreign countries political system. Drop the title and it’s cool.”

Daisy Royal simply added: “Yes! I agree with encouragement ‘to vote’ she did not tell us who to vote for did she.”

Members of the Royal Family aren’t legally barred from voting in elections, but are widely expected to remain neutral when it comes to politics.

This means the Queen and other senior royals do not vote themselves, in a bid to avoid the risk of swaying public opinion.

However, as outlined by Mr Scobie, the monarch had urged Britons to exercise their voting rights.

In 2003, following a worryingly low turnout at local elections, the monarch told the Welsh Assembly: “It is vital to the health both of the United Kingdom and of Wales that our democratic institutions flourish and adapt.

“I share your concerns that we must encourage all our people to exercise their right to vote. This is a real challenge now before us all.”

Last week, Meghan took part in a virtual event to encourage women to vote and help mobilise other eligible voters to register and cast their ballot on November 3.

In her impassioned speech, the Duchess of Sussex said: “We’re only 75 days away from Election Day, and that is so very close and yet there’s so much work to be done in that amount of time because we all know what’s at stake this year. I know it.

“I think all of you certainly know it and if you’re here on this fun event with us, then you’re just as mobilised and energised to see the change that we all need and deserve.

This speech, which followed a statement issued by Meghan to Marie Claire in which she explained why she votes, was attacked by ITV’s Good Morning Britain presenter Mr Morgan.

He wrote on Twitter: “The Queen must strip the Sussexes of their titles.

“They can’t remain as royals & spout off about foreign elections in such a brazenly partisan way.”