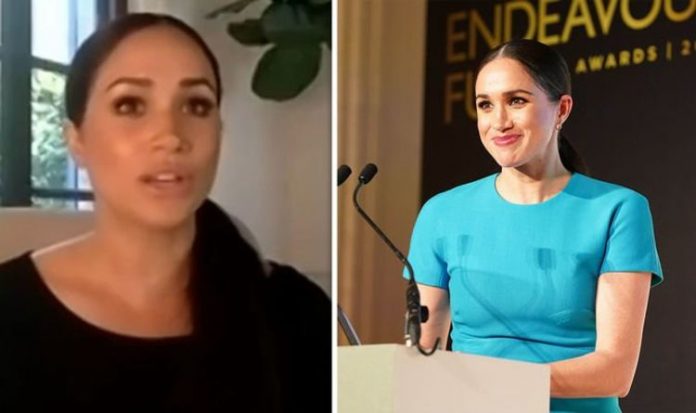 Meghan Markle, 38, and Prince Harry, 35, stepped down as senior royals in March and now have more freedom to speak out on difficult or controversial topics. In recent weeks US native Meghan has leant her voice to a campaign encouraging Americans to vote in the upcoming November election.

As well as sharing why she plans to cast her vote, Meghan claimed those who abstain from doing so are “complicit.”

Last week, the Duchess was among high-profile figures to speak at a virtual couch party organised by non-partisan body When We All Vote.

When We All Vote has been backed by Michelle Obama and during the virtual conference Meghan spoke alongside Obama White House senior adviser Valerie Jarrett, Glamour magazine editor Samantha Barry and actress Yvette Nicole Brown.

Meghan added: “And specifically not women of colour.

“As we look at things today, though it had taken decades longer for women to get the right to vote, even today we are watching so many women in different communities who are marginalised.

“Still struggling to see that right come to fruition. And that is simply not OK.

“It’s all the more reason for each of you to be out there supporting each other to understand this fight is worth fighting, and we all have to be out there mobilising to have our voices heard.

“She and formerly-respected husband harry are obviously no longer politically neutral and should be stripped of their Sussex titles.”

While Good Morning Britain (GMB) presenter and commentator Piers Morgan slammed Meghan’s voting comments, calling for the Sussexes to be stripped of their titles.

He said: “They can’t remain as royals & spout off about foreign elections in such a brazenly partisan way.”

Despite mounting calls for Meghan to lose her HRH style, one royal commentator has claimed they are misdirected for now.

Expert Richard Fitzwilliams told Express.co.uk: “Calls for Meghan to lose her royal title because of what are perceived as political comments are wide of the mark at the moment.”

While Prince Harry, as a British citizen is unlikely to align himself with partisan US politics, Meghan is in a “unique” position, Mr Fitzwilliams explained.

He added: “Meghan’s case is unique. She would obviously be

superb as a political activist campaigning on issues such as gender equality and diversity.

“Harry is on a journey which is very ‘woke.’ Apart from Invictus and mental health, he will champion other charitable causes but will avoid party politics.”

As part of their withdrawal as senior royal Meghan and Harry agreed with the Queen that while they will keep their royal titles they will not use them in conjunction with their work going forward.