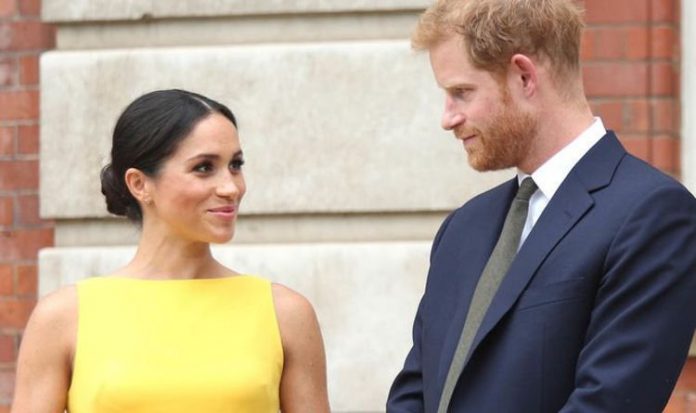 Meghan and Prince Harry have updated the website of their organisation Archewell to match up with their latest call for action entirely dedicated to women. Archewell.com now features more than 20 “real acts of compassion” in support of both Women’s History Month and International Women’s Day.

In the wake of this change, fans of the Sussexes took to Twitter to celebrate the royals.

One, using a clip of a man clapping his hands, wrote: “Harry and Meghan walking the walk as usual.”

Another said: “They’ve always said, they rather get down and do the work instead of just show up, cut ribbons and wave. We are excited for what’s to come.”

A third added: “I love this couple they lead with their actions.”

Other fans of the Sussexes appear to have embraced the use of the hashtag ServiceIsUniversal, a sentence coming from Meghan and Harry’s statement dated February 19.

Another said: “This is Wonderful!!! I have been waiting for this. Will do my little part, to support or donate. #ServiceisUniversal #archewellfoundation”

And a third added: “Can’t wait to see what they have planned #ServiceIsUniversal after all”.

Meghan and Harry stated “service is universal” in a statement published just minutes after the Queen announced her decision to ask them back their military and royal patronages.

Buckingham Palace said that, following Meghan and Harry’s decision not to return into the royal fold as full-time members of the Firm, “it is not possible to continue with the responsibilities and duties that come with a life of public service.”

Upon unveiling the new version of the Archewell website, Meghan and Harry included in the organisation’s logo the words: community, service, compassion, action.

In their call for action, the Duke and Duchess of Sussex said: “We know the world is asking more and more of women every day — as wage earners, leaders, educators, carers, and more.

“In recognition of International Women’s Day, let’s unleash a groundswell of real acts of compassion for the women in your life and in your community.”

Some of the acts of compassion suggested are accompanied by links to organisations supported by Meghan and Harry – such as CAMFED, a pan-African movement supporting access of girls into higher education.

On the other hand, others are tips and simple gestures to carry out.

Under the suggestion “express your support for military families”, Meghan and Harry said: “Not all military spouses are women, but many are.

“Make sure those in your community feel seen and valued for their service too.”

Another tip, titled “pick up the phone and check in on a friend”, read: “From work to family care, many of us are juggling a lot at the moment.

“Asking something as simple as ‘Are you OK?’ can go a long way.”

Meghan and Harry already spoke how important they think it is to ask others how they are doing when they appeared in a special episode of the podcast Teenager Therapy.

The Duchess also confessed in 2019 “not many people have asked if I’m okay” during an interview with Tom Bradby, included in the documentary Harry & Meghan: An African Journey, focused on how she was coping with public scrutiny as a new wife and mother.