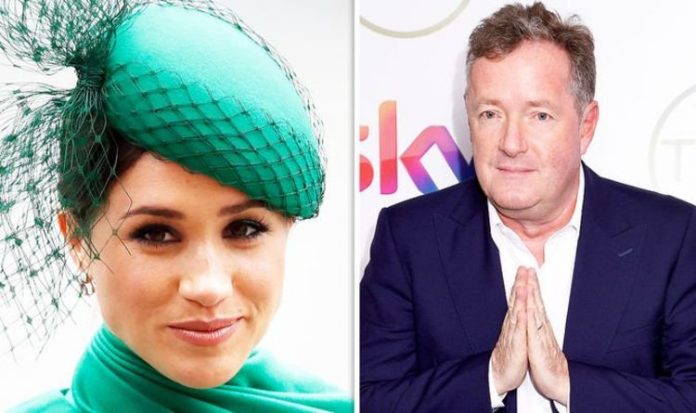 It’s nearly one-year on from when Prince Harry and Meghan announced their departure from senior roles within the Royal Family. The Sussexes’ decision caused controversy at the time and questions were asked about how they would be able to survive without as much financial-backing from the Queen. Since then, the royals have brokered deals with Netflix and Spotify and moved to Santa Barbara, California.

Harry and Meghan’s deal with Netflix is reported to be worth $112million (£81million) and will see them produce TV shows for the streaming giant.

This week, it was reported that despite their deal the royals would not have any control over the editorial output of other shows including The Crown.

A Netflix source claimed that the show “was brought up” but the streaming platform “stood firm” and told them they would not be able to interfere.

They commented that the contents of The Crown would be left to filmmakers Leftbank and the show’s creator Peter Morgan.

The source told : “Unless a legal matter, there is no interference.”

Meghan Markle fans were fuming after Piers Morgan shared a tweet sent to him by Prince Harry’s wife (Image: GETTY)

They claimed that the Sussexes “did not fight over this”, which the individual considered “odd given the next time period the show will cover”.

The source referred to the tragic death of Prince William and Harry’s mother Princess Diana in 1997, which will be covered next season.

Harry and Meghan have also bartered with the music and podcast service Spotify to secure a series, which is reportedly worth $40million (£29million).

During the recording, the one-year-old tried to say “Happy New Year” to listeners and The Guardian claimed to be able to hear a “slight American accent”.

The Queen rejected the 12-month review of Meghan Markle and Prince Harry’s deal to leave their roles (Image: GETTY)

The Evening Standard also reported that Harry and Meghan charged $1million (£730,000) for speaking at a virtual event.

It’s believed that they could earn even more when they can speak in-person at public gatherings.

The deals the couple have brokered will likely have shocked many in opposition to the couple’s departure, previously referred to as ‘Megxit’.

Their opponents included Good Morning Britain host Piers Morgan, who has regularly criticised the couple for leaving their royal roles.

In his book, Wake Up: Why The World Has Gone Nuts, which was released in October, he called the couple “pathetic”.

Meghan Markle and Prince Harry tied the knot in 2018, here is their romantic timeline (Image: EXPRESS)

His comments came amid Harry and Meghan’s demand for privacy, all-while promoting themselves and brokering deals to support themselves financially.

The royals previously “banned” four British newspapers “from their lives” in a statement that they sent “to the world’s media” last year.

Mr Morgan claimed this statement was contradicted when Meghan released a video of herself and Archie reading a children’s book online.

He wrote: “On every level, this seems completely at odds with her and Harry’s professed desire to protect their son from public attention, and just more pathetic hypocrisy.

Piers Morgan ‘crossed the line’ with some Meghan Markle fans by sharing a message from her in 2015 (Image: GETTY)

“I won’t take such ill-informed lectures from a massively privileged man who quit his family and his country to pursue a vacuous new life of pampered self-indulgence in the world’s most shallow and media-frenzied city.”

Mr Morgan’s rant followed his controversial decision to share a private message between himself and Meghan on Twitter.

He posted a screenshot of the 2015 message in January last year, which read: “Why hello there – thanks for the follow. Big fan of yours!”

Alongside the photo, Mr Morgan wrote: “In happier times… when Meghan first slid into my DMs. Think it’s fair to say she’s probably not such a ‘big fan’ of mine now.”

Fans flocked to Meghan’s defence and accused Mr Morgan of sharing a private message she did not believe the public would ever see.

One Twitter user wrote: “Dude your [sic] coming over as deeply… deeply creepy.”

A second wrote: “Why are you sharing this Piers? To mount a campaign against someone because they wouldn’t give you any attention is rather sad.”

A third wrote: “Hmm looks like you followed her first and she was being polite to you.”

It’s now one year on from Mr Morgan’s decision to share the message.

Last week the Queen cancelled the 12-month review of the deal agreed when Harry and Meghan split from the family.

Royal correspondent Katie Nicholl told Royal TV’s Royal Beat that the decision not to change the agreement was because they were all happy with it.

She said: “My understanding from the Sussexes’ camp is that there has been communication with the Queen, Prince Charles and with William as well.

“The general feeling is that this [current situation] is working.

“This isn’t to say that people are not watching closely what these deals are, what the couple are doing and what these projects are going to be – but there is not this need to have this review one-year on.”