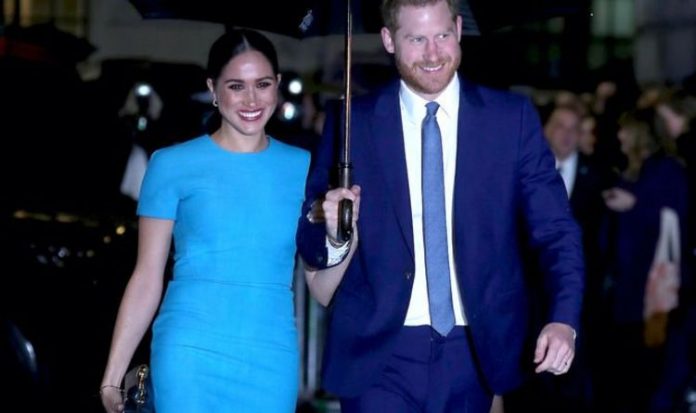 Meghan Markle and Harry: Expert on censorship of hate speech

It has been more than a year since “Megxit” shook the Royal Family. Meghan and Harry announced to the world, via a social media post, that they would soon leave the UK for a private life in North America. The Firm was duly informed, with Harry required to attend a private meeting with the Queen to discuss the protocol for a royal departure, in what was dubbed the “Megxit Summit”.

They quickly established they would split their time equally between North America and the UK, a trade-off that was made impossible with the onset of the coronavirus pandemic.

Arriving in Canada to a warm welcome, the jovial feelings soon fizzled out as polls revealed the frustrations felt by Canadians over the prospect of their taxes potentially being funnelled towards Meghan and Harry.

Dashing south to the US, they put down roots in California, where Meghan’s mother, Doria Ragland, and many of her friends were based.

Many at the time noted that the announcement and move were sudden, with Palace staff worried it had not been fully planned out.

Meghan Markle: The pair were reportedly planning their personal brand plans before their departure (Image: GETTY)

Prince Harry: It has been more than a year since the pair announced their plans to leave the Firm (Image: GETTY)

However, according to royal commentator Russel Myers, the plan was long in the making – the pair even had their own personal post-royal brand ambitions in mind.

The revelation came during an episode of The Daily Mirror’s ‘Pod Save the Queen’, shortly after the couple had moved to California.

Here, Mr Myers said: “Certainly people I’ve spoken have said that there were huge, huge plans to launch them and their new foundation alongside the social media profiles within weeks of leaving.

“Obviously that has been put on the back burner for now, due to the global situation with Covid-19.”

JUST IN: Meghan and Harry quit social media ‘to drive traffic to Netflix’

The Queen: Many claimed the move was unfair on the likes of the Queen and Prince Philip (Image: GETTY)

Interestingly, however, Mr Myers noted that the Firm itself might have suggested Meghan and Harry take some time away from the spotlight.

He continued: “The family had certainly told them to take a step back and to have some time off.

“I found that a bit astonishing, really.

“They’d already had time off with their seven-week holiday, and with everything that’s been going on they really haven’t been seen publicly for such a long time.

Progressive: They initially said they wanted to carve out a ‘progressive role’ in the Royal Family (Image: BBC)

“But because the situation and emotions had run so high, that’s probably not bad advice, to take a few months off.

“And the coronavirus situation is unfortunately going to last several months.

“I just don’t know how they can put themselves to good use, publicly, at the moment.”

They have since launched the Archewell Foundation, a nod to their first child, Archie Harrison Mountbatten-Windsor.

It is a non-profit organisation aimed at “driving cultural change” and putting “compassion into action”.

Yet in terms of carving out their own personal brands – their original goals – Meghan and Harry appear to have retreated into a relative obscurity.

This was especially true after they announced they planned to delete all of their social media accounts earlier this month.

Reports went on to suggest that they would not push any of their brands or projects on the platforms, including Archewell.

Baby Archie: Their first child, Archie, is not believed to have met members of the Royal Family yet (Image: GETTY)

This, it is believed, is largely a result of the pair’s online bullying.

Meghan previously claimed she had been 2019’s “most trolled person in the entire world – male or female”.

Elsewhere, however, they seem to have picked up on new ventures that look certain to open opportunities.

Netflix lured them in with a deal worth £109million to create original content for the subscription-based platform.

And Spotify offered a lucrative contract in exchange for the ‘Archewell Audio’ podcast, which has already sparked a “privacy” controversy after Archie spoke on its first episode.