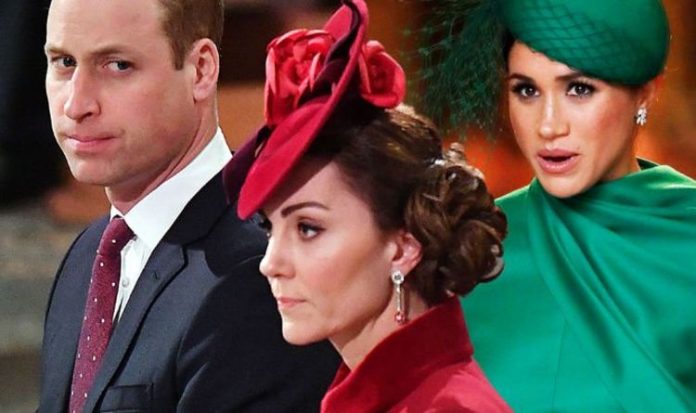 During Channel 5’s documentary ‘Meghan and Harry: The New Revelations’ royal experts Emily Andrews and Kate Nicholl discussed the relationship between Meghan Markle and Kate Middleton. Ms Nicholl stated the Duchess of Sussex took it personally that Kate was too busy to sit her down and guide her through life as a royal.

Msi Nicholl said: “So while there might have been an expectation from Meghan that Kate was going to sit down and show her the ropes.

“Perhaps that was an unrealistic expectation, the Duchess of Cambridge is a busy woman.

“Meghan clearly took that quite personally.”

Ms Andrews added: “I think it seems that Meghan had a very unrealistic expectation of her relationship with Kate.

“If you look at it from the Cambridges point of view, they don’t know this woman at all.

“From their point of view, they absolutely did welcome her into the family.

“William and Kate invited Meghan and Harry to apartment 1A.

“Kate met Meghan pretty early on in the relationship.

Mr Myers said: “When they were told that they had to be brought into the confines of the Buckingham Palace machine I think that is when they realised their wings were being clipped and they weren’t going to realise the stardom that they had set themselves up to be.”

Ms Adom said: “I think they were particularly worried about William and Kate, that they might become more popular than them.

“I think they just couldn’t stand the idea of that.

“They couldn’t stand the idea of this young modern couple, half of which is African American potentially being more popular than William and Kate who were their golden couple.”