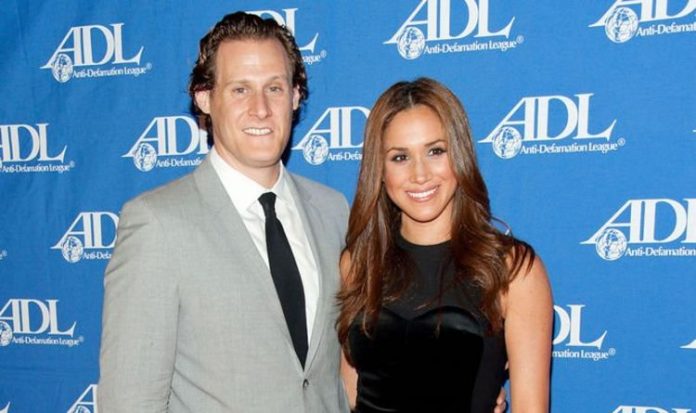 Before Meghan was married to Prince Harry, she was in a near-decade-long relationship with Trevor, a Hollywood producer and talent agent. The pair lived together in Los Angeles until Meghan landed her role on the TV legal drama Suits and moved to Toronto. While their marriage was not to last, their love for each other was clear to those around them.

Although Meghan has become estranged from her family in recent years, her brother Thomas recalled seeing Meghan and Trevor at their grandmother Doris’ funeral.

He told royal biographer Andrew Norton: “She was completely head over heels and seemed really happy when I saw them together, despite the sad circumstances.

“They seemed extremely happy together.”

The couple even got married in Montecito, where Meghan and Harry now live.

Meghan and Trevor first met in a bar in West Hollywood in 2004, and both had big dreams for working in the film and TV industry.

Trevor ran his own production company called Underground and Meghan was running from audition to audition trying to get her big break.

They got married in a beautiful ceremony in Jamaica in 2011 with their friends and family.

It was around this time that Meghan’s paternal grandmother Doris was unwell and Meghan frequently visited her before she sadly died that year.

They became very close in the months before her death, with Thomas Jnr recalling how she “got weird” with him and Thomas Snr ‒ Meghan’s dad and Doris’ son ‒ but not with Meghan.

He said: “WIth her dementia, Grandmother got weird about me and Dad, but was OK with Meg.

“I saw the private side of Meghan, a genuinely caring, loving person.

“She had an amazing relationship with Doris, even though she didn’t know her that well.”

Doris’ funeral was the first time several members of the Markle family had met Trevor.

However, the couple’s wedding, unfortunately, coincided with Meghan moving to Toronto to film Suits, which she starred in for seven seasons.

The distance, as well as their very different personalities, began to grate after a while and they divorced in 2013, citing irreconcilable differences.

Meghan reportedly mailed her rings back to Trevor in the post.

Despite his earlier comments about the couple seeming very happy at the funeral, Thomas admitted in an interview last year that, even then, he had some reservations about the relationship.

“But then at my grandmother’s funeral I saw this side of Meghan, like scowling at him and him cowering like a puppy dog and doing what he’s told.

“And really just treating him like… and he worshipped the ground she walked on.”

Trevor has never spoken to the press about Meghan, despite their long relationship and her meteoric rise into the spotlight.

However, according to Mr Morton’s biography ‘Meghan: A Hollywood Princess’, he had been shocked by the break up and still felt badly about it five years later.

One of Meghan’s oldest friends Ninaki Priddy reportedly told writer Rebecca Hardy: “It was such a surprise for Trevor that even at a distance of five years, he can barely contain his anger.”

Meghan: A Hollywood Princess was written by Andrew Morton and published by Michael O’Mara in 2018. It is available here.