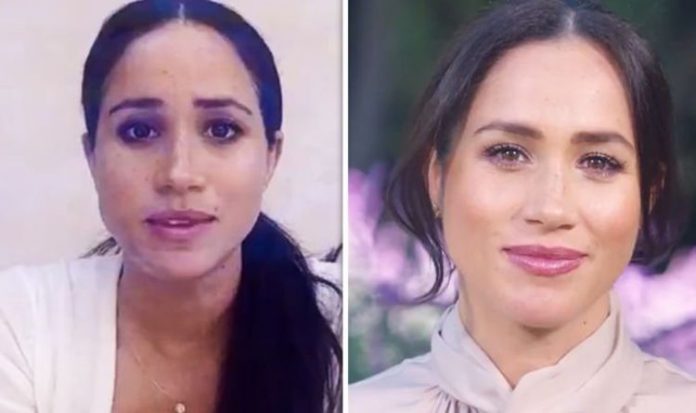 Meghan has today announced that she is becoming an startup investor, and she has chosen Clevr Blends — a female-founded instant oat-milk latte company — as the first firm in her portfolio. She has also released a speech for CNN Heroes where she thanked the “individuals [who] stood up and made sure the most basic needs of our communities were met” during the coronavirus pandemic. The royal also penned an opinion piece detailing that she had suffered a devastating miscarriage in July, which was praised for its heartbreaking honesty.

Before this flurry of activity, the Duke and Duchess of Sussex had kept a relatively low profile since leaving the royal frontline.

Yet royal insiders have suggested that they will be upping their public appearances in 2021 — a claim which appears to be supported by Meghan’s recent activity.

However, the Duchess of Sussex was reportedly consumed with worry before making one of her most memorable speeches from this year – her address which tackled the Black Lives Matter movement back in June.

When a black American man, George Floyd, was killed while being arrested back in May, international protests were sparked over systemic racism in the western world.

Writing in his book, ‘Meghan Misunderstood’, biographer Sean Smith explained: “Meghan knew that anything she said in the aftermath of the killing of George Floyd would be examined word for word.

“She hesitated. The old Meghan would have plunged in, speaking up defiantly about what was right.”

Meghan was a successful public speaker prior to joining the Royal Family, due to her years as an actress and as a UN ambassador.

Yet, Mr Smith claimed “the relentless and ongoing negativity” she faced as a royal, as well as the way “the Royal Family ground down any hint that one of the Firm might put their head above the parapet” had taken a toll on her.

He claimed: “She was like a prisoner who had escaped down a dark tunnel, and, surfacing, needed time to adjust to the light outside.”

While Harry and Meghan kept their heads down in the first few weeks after leaving the Firm and relocating to California, the Duchess of Sussex had promised to contribute to a graduation address to Immaculate Heart, her alma mater.

She described the online bullying as “almost unsurvivable” and admitted it had a huge effect on her mental and emotional health.

However, 24 hours later, after withdrawing her speech for the Immaculate Heart students, the Duchess of Sussex changed her mind.

And when she spoke, Mr Smith observed “it was the old Meghan”.

Meghan told the graduating students: “I wanted to say the right thing and I was really nervous that I wouldn’t or that it would get picked apart and I realised that the only wrong thing to say is nothing.”

As a biracial woman — and the first biracial person to join the Royal Family — her words clearly had a strong impact on the public and the video of her speech went viral.

However, the Sussexes have continued to face significant criticism in recent months.

For instance, Meghan’s CNN Heroes video has been torn apart as royal watchers questioned whether she should keep the title of ‘Duchess’ even though she is no longer a working royal.