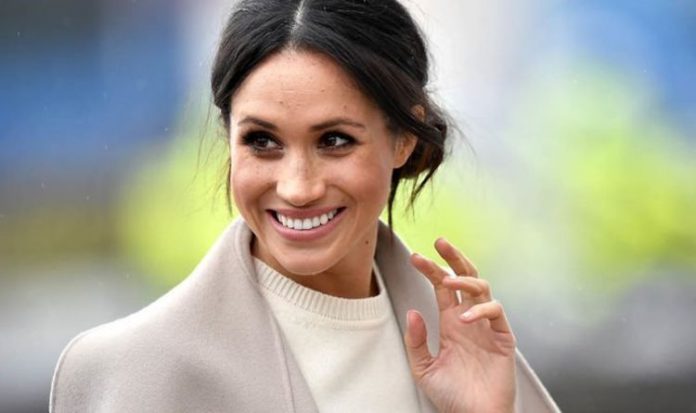 Meghan has become the first-ever member of the Royal Family known to have cast her ballot, a source close to the Sussexes has confirmed. They told Newsweek: “I’m not going to get into methods or timing, but can confirm that the duchess is voting in this election.”

There is no law in the UK barring members of the Royal Family from voting at a local or general election.

However, the Queen and her relatives usually choose not to exercise this democratic right to remain as neutral as possible in the eye of British voters and to avoid swaying public opinion.

The Royal Family’s official website, Royal.uk, read: “As Head of State The Queen has to remain strictly neutral with respect to political matters.

“By convention, The Queen does not vote or stand for election, however Her Majesty does have important ceremonial and formal roles in relation to the government of the UK.”

Meghan Markle is voting in this US election, a source has said (Image: GETTY)

The Duchess of Sussex had previously suggested she would vote at the 2020 US election.

In August, Meghan first addressed the issue of voting in a statement issued to Marie Claire magazine.

The former actor was among the 100 influential women asked by the magazine why they would vote in the 2020 election.

“And the opportunity, that fundamental right, is in our ability to exercise our right to vote and to make all of our voices heard.

“‘The rain that refreshes the parched ground is made up of single drops’.

Meghan Markle is a US citizen (Image: GETTY)

Over the summer, Meghan also took part in an event focused on voter registration, When All Women Vote, to push more women to register to cast their ballot in person or absentee.

During the virtual summit, the Duchess said not voting in this election would make people “complicit”.

She said: “So you know it’s interesting we are obviously faced with a lot of problems in our world right now, both in the physical world and in the digital world.

“If you aren’t going out there and voting, then you’re complicit.

READ  What you need to know - UK

The Duchess of Sussex also publicly reflected on the ban on voting royals abide by.

Taking part in an event organised by not-for-profit news organisation The 19th, Meghan said: “I look at my husband for example.

“He’s never been able to vote, and I think it’s such an interesting thing to say the right to vote is not a privilege, it is a right in of itself.”

In September, Meghan and Harry appeared together in a video recorded for ABC’s special Time 100.

While the Duchess urged again US citizens to cast their ballot in the “most important election of our lifetime”, the Duke of Sussex reflected on his own experience with elections.

He said: “This election I’m not going to be able to vote here in the US but many of you may not know I haven’t been able to vote in the UK my entire life.