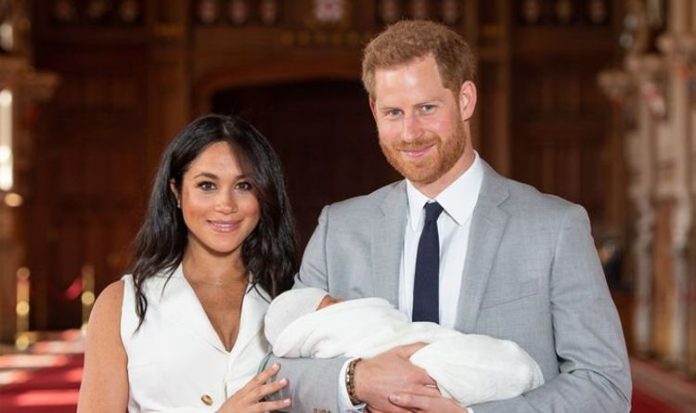 The Duke and Duchess of Sussex have announced they are expecting their second child, who Meghan will give birth to in the US. This will be a very different experience from when she had Archie, who was born when Prince Harry and Meghan were still working royals. Now, they are living across the Atlantic Ocean and no longer part of The Firm.

However, Meghan was departing from royal tradition even back in 2019 when she had Archie, after she was urged to skip the “pomp and circumstance”.

She did not inform the press and public when she went into labour, nor did she reveal where she was having her baby.

She even refused to do the traditional photo opportunity on the hospital steps.

Instead, she simply released a statement after the baby was born safely, and invited the cameras to Windsor Castle two days later to get a glimpse of Archie.

READ MORE: Princess Eugenie’s luxury stay at hospital could have cost up to £500k

While some people felt the Sussexes rejecting this royal tradition was entitled, others felt it was the right thing to do.

Among them was the CEO of a parenting company, who advised Meghan ahead of time to skip the traditional photo after giving birth.

Chelsea Hirschhorn, founder of Fridababy, wrote an open letter to the Duchess in which she was brutally honest about the pain after childbirth.

She said the tradition of royal mothers emerging with their newborns to be photographed expects women to be “radiant” despite the stress they have been under.

She urged Meghan to “skip the pomp and circumstances of the baby parade” and instead avoid the cameras in order to help quash unrealistic expectations of mothers immediately after childbirth.

Ms Hirschhorn wrote: “I assume that, like your princess predecessors, you’ll be expected to parade outside of the hospital in front of throngs of photographers to show off your new bundle of joy shortly after giving birth.

“You’ll smile, you’ll wave, you’ll be radiant, but between your legs will be a whole different story.

“Sure your blowout will be perfect for your hospital step photo-op, but people will be opening on all the wrong things ‒ like how soon you will fit into your pre-baby wardrobe ‒ instead of having an honest conversation about what women go through during birth and immediately after.

“But us mums will know that while you wave from that step you’ll be one pair of mesh underwear away from your first post-baby poop (brace yourself)!”

Ms Hirschhorn, who is a mother-of-three, was so determined to get her message out that she published it as an ad in the New York Times.

She added: “When the ‘big reveal’ day arrives but you’re feeling like all the King’s horses and all the King’s men couldn’t put your vagina back together again – use this stage to do your part for all women.

“Skip the pomp and circumstance of the baby parade.”

Archie was born in May 2019, and both he and Meghan were healthy.

However, it will not have been a walk in the park, as childbirth is extremely challenging for every mother.

Ms Hirschhorn warned: “The bleeding and swelling will linger, peeing will burn and sitting like your old self will feel like a herculean feat.

Nevertheless, Meghan and Harry are likely looking forward to the arrival of their second child.

It will be especially poignant after the Duchess sadly suffered a miscarriage last year.