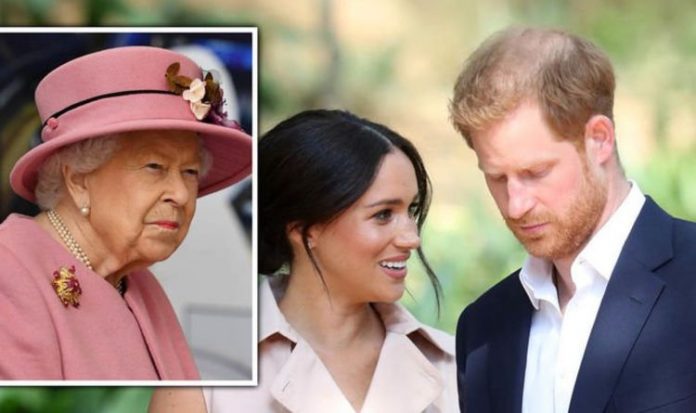 A fresh clash between the Sussexes and Buckingham Palace erupted this week, after Meghan said the palace “dictated” changes to her son’s birth certificate – a claim dismissed by royal aides. This clash, one expert has noted, is “laying bare” the complex relationship between the Duke and Duchess of Sussex and their UK-based relatives.

Royal commentator Rebecca English reported a royal source who branded the wording of Meghan’s statement “somewhat unfortunate” after it emerged the Duchess’ names had been removed from Archie’s birth certificate.

They added: “The language used — suggesting it was ‘the Palace’ who ‘dictated’ it, is somewhat unfortunate.

“The decision to issue a statement and the wording of it poses more questions than it answers, unfortunately.”

“So an intriguing but, in the scheme of things, rather inconsequential story has ended up being picked over worldwide, thanks to a tailwind from across the pond.”

Writing in the Daily Mail, she added: “In doing so, it has laid bare the worryingly fractious relationship between the Sussexes, ensconced with their advisers in a California mansion, and the Royal Family.”

News that the name ‘Rachel Meghan’ had been removed from the birth certificate of her son broke on Sunday.

Royal expert Ingrid Seward said it may be seen as a “sign” Meghan and Harry “were desperate to do something different to the Cambridges”.

Meghan was quick to issue a statement slapping down claims of a royal snub, with her spokeswoman saying: “The change of name on public documents in 2019 was dictated by The Palace, as confirmed by documents from senior Palace officials.

Meghan said the suggestion “she would oddly want to be nameless on her child’s birth certificate, or any other legal document, would be laughable were it not offensive”.

She added: “There’s a lot going on in the world – let’s focus on that rather than creating clickbait.”

However, earlier this week, a royal source contradicted Meghan, telling the Daily Mail: “The certificate was changed by the former office of the Duke and Duchess of Sussex.

“It was changed to ensure consistency of the name and title of the Duchess with other private documents”.

Meghan and Prince Harry officially stepped down as senior royals in late March 2020, two months after they first announced their intention to change their position within the Royal Family.

The plan they set out in their statement dated January 8, 2020 would have seen the couple becoming part-time working royals, financially independent but still free to carry out royal engagements.

Meghan Markle news: The line of succession to the throne (Image: EXPRESS)

This half in, half out position was deemed unworkable by the Queen, and the royals agreed on harsher terms for the Sussexes’ exit.

Royal expert Katie Nicholl claimed Prince William was so angry at his brother in January 2020 he could not stand taking part in the lunch prior to the Megxit summit.

However, she added, the brothers have hugely improved their relationship and now speak regularly over the phone.

The Queen, Ms Nicholl continued, is “in close contact” with Harry and Meghan.

The expert told ET online: “The Queen has kept in close contact with Harry and Meghan for the past year.

“She’s in touch with them, she knows what’s going on in their lives, they discuss their plans with her.

“Harry has always seen his grandmother as a mentor and while he might be in L.A., that hasn’t changed.”