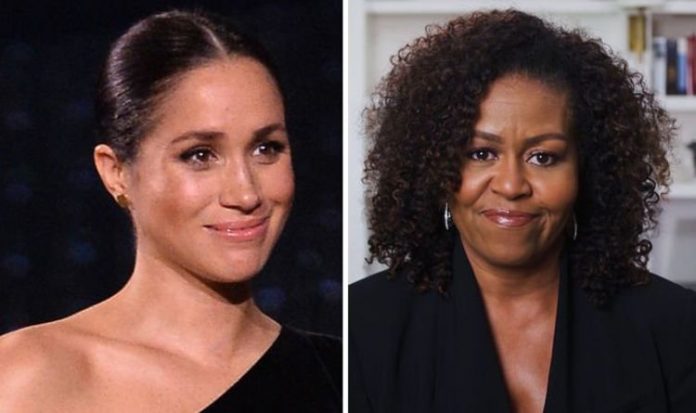 Meghan and Harry have just secured a deal which parallels that which the Obamas signed with the streaming service Netflix — although the Sussexes’ is allegedly worth much more. The Duke and Duchess of Sussex are said to be close with the former President and First Lady, especially as Harry used to welcome the famous pair to Britain during their state visits. Meghan and Michelle have been compared a great deal ever since the Duchess returned to her politically active roots and implored women to vote in the presidential election while sharing a platform with Mrs Obama.

However, the two couples’ global status and shared interests may be where the similarities end, according to commentator Celia Warden.

She claimed that, while Meghan has repeatedly suggested she was “voiceless” in the Royal Family’s frontline, Mrs Obama “resolutely refused to whinge throughout her years in the White House”.

Her husband, as the President, was always centre-stage instead.

Ms Warden explained that Michelle was “effectively muted by her husband’s presidency and forced to downplay her own ambitions and intelligence”.

In comparison, the sympathetic account Finding Freedom claimed one of the main motivations for Meghan and Harry to leave the royal fold was because they felt like they had to “take the back seat” to other senior royals, such as Prince William, who are higher up in the line of succession.

Ms Warden also pointed out their different approaches to life in the public eye.

The one piece of advice Mrs Obama publicly gave to Meghan, via a Good Housekeeping interview, in 2018, was to “take some time and don’t be in a hurry to do anything”.

Ms Warden added: “Growing up as a privately educated schoolgirl in Hollywood is unlikely to have given Meghan the same insights as the ones Michelle gleaned being raised in a cramped apartment on the wrong side of Chicago.”

She continued: “One of these two women met her husband at the Chicago law firm where she was one of just two African Americans in the department; the other was set up on a blind date by a member of London’s society set, after allegedly putting the word out that she was keen to land a ‘famous British man’.”

Despite their differences, Mrs Obama has openly praised Meghan on her Instagram account, by saying she is a “thoughtful leader” who is “breaking the mould and making our world better for it”.

Some insiders also think the Obamas may have influenced Meghan and Harry to make the dramatic move of stepping away from the Royal Family earlier this year.

Indeed, Mrs Obama told Meghan “there is no prescribed path” when advising her what to do with her guest-edited Vogue magazine last year.

The Evening Standard also pointed out in January how both women “questioned the scrutiny that their husband’s jobs bring and are trying to use their platform to carve out progressive roles in the world”.