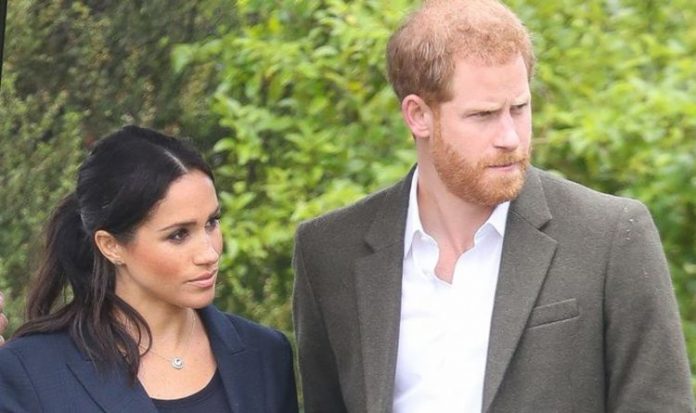 Meghan Markle and Prince Harry have repaid their £2.4 million taxpayer-funded renovation of Frogmore Cottage, their UK residence. The New York Times also reports that the Sussexes are no longer receiving any income from Prince Charles’ Duchy of Cornwall. ITV Royal Rota podcast hosts Chris Ship and Lizzie Robinson discussed how the couple’s financial independence is sending a stark message.

Mr Ship told listeners: “I suppose what they’re kind of trying to do is deny any justification for any media intrusion.

“They’re not taking taxpayers’ money, they’re not working members of the Royal Family, they’ve set up their own business, they are working with Netflix and taking money from them.

“There is no justification to hover cameras over their house and try and take pictures of Archie, not that there ever was to be fair.

“A lot of the commentary around this was that this couldn’t be a clearer sign that they are done, cut ties with their lives as working members of the Royal Family.”

Ms Robinson added: “Lots of people are saying this is significant because there are no ties anymore, they’re not coming back.

“Yes, the ties have been well and truly severed.

“So Harry and Meghan are now setting out as former royals with a very lucrative deal with a private media company, Netflix.

“They’re living in a mansion which they are funding themselves in Los Angeles, technically Montecito.”

The Sussexes announced their signing of a multi-million pound deal with US streaming giant, Netflix.

The former working royals will be producing and possibly starring in documentaries, feature films and children’s’ programmes.

In their statement announcing their departure from the monarchy, the Sussexes stated that they would “work to become financially independent”.

They also promised to reimburse the sovereign grant for Frogmore, which they have done.