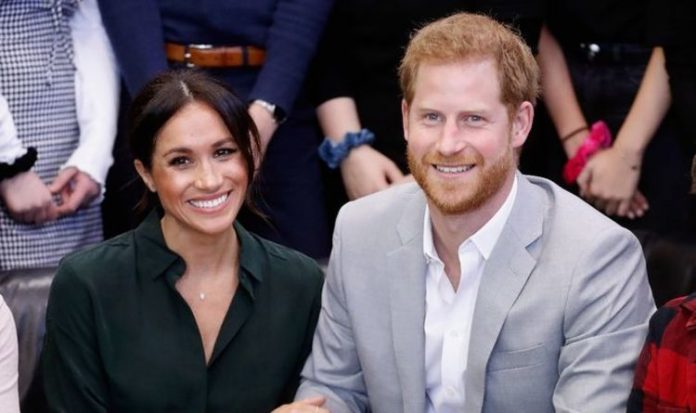 The Duke and the Duchess of Sussex have been contacted by live agents with huge offers after revealing they had struck a deal with streaming giant Spotify to host and produce podcasts. Meghan and Harry’s live events would be charged at a premium for a reduced, intimate audience, an insider told .

The source told the newspaper: “Live agents have been eyeing up Meghan and Harry’s new deal with great interest.

“They have been inundated with offers about the possibility of touring the podcast when the time is right.

“The idea would be that the events would be very intimate, with tickets going for a premium.”

While the couple’s deal with the steaming service has been estimated in the millions, the money from the live events would initially go to charitable causes.

The insider added: “All the cash would go to charity at the beginning.

“Meghan and Harry would record then in front of a small audience.

“Spotify, who their podcast deal is with, have been investing heavily in the live space in the market and want to start taking podcasts out on the road.

“Meghan and Harry’s is not just hugely high profile but potentially hugely lucrative.”

READ MORE: Meghan and Harry ‘rubbed Kate and William up the wrong way from start’

He said in a statement: “The Duke and Duchess of Sussex may live in California, but the power of their voices rests in their status as citizens of the world.

“That they are embracing the extraordinary capacity of podcasts on Spotify while also seeking to elevate underrepresented voices is a testament to their appreciation for the potential of audio storytelling.

“We are proud to partner with The Duke and Duchess and look forward to listeners hearing directly from them and the other creators that they will be elevating via our global platform.”

But the new project did not sit right with everyone with some taking to Twitter to denounce the move and even call for the Duke and Duchess to be stripped off their royal titles.

Another user added: “I see their ‘escape from the limelight’ to ‘protect their family’ is going well. Really keeping their heads down.”

A third person said: “Drop the duchess. You left UK & Royal family to do your own thing.”