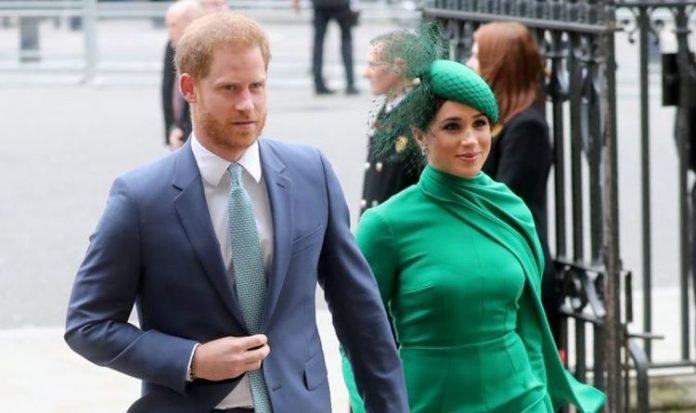 The Duke and the Duchess of Sussex – who has recently won a privacy claim against Associated Newspapers Ltd – have come under fire after they announced on Sunday that they were expecting their second child. But critics were urged to allow the couple to enjoy the happy moment after they opened up about their pregnancy loss last year.

Writing for the Telegraph, journalist Bryony Gordon called on real fans to allow the Sussexes “a moment of happiness”.

The writer, who interviewed the Duchess in November 2019 during a visit to a programme for disadvantaged women, said she witnessed the beginnings of the couple’s life together.

She wrote: “Having worked with the Sussexes over the past few years, and knowing how difficult much of their early family life together has been, it is a lovely thing to see.

“It is clear that the couple want to use their positions for good, be it through setting up their Archewell charity, making documentaries about mental health for Netflix, or highlighting the hidden grief of miscarriage… without worrying that their private messages to friends and family might end up on the front page of a newspaper.”

She added: “It doesn’t seem like much to ask.

“For once, let’s allow them a moment of happiness, without turning it into a ridiculous exercise in point-scoring.”

Some of the most prominent critics of the couple, Good Morning Britain presenter Piers Morgan, has also weighed into the debate regarding the pair’s privacy.

Commenting on the couple’s recent pregnancy announcement and confirmation of their televised interview with Oprah Winfrey, the journalist branded them the “Duke and Duchess of Privacy”.