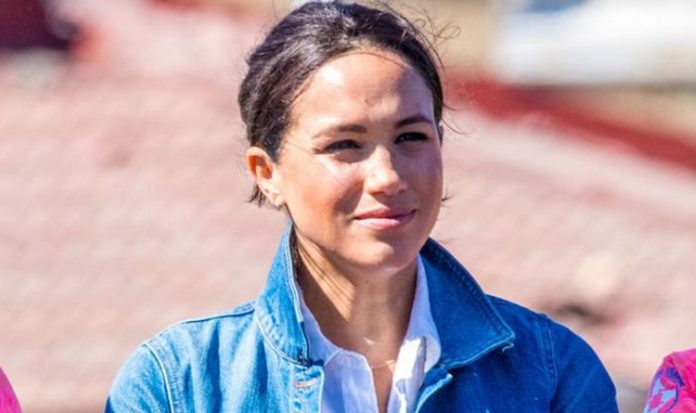 While still a member of the Royal Family, Meghan and Prince Harry stepped down from their duties on March 31 this year, before moving to the US. The Duchess took part in Michelle Obama’s When All Women Vote virtual event, which aimed to increase women’s participation in the November 3 election. But her appearance has split opinion, with some believing she has become ‘too political’.

At the event, Meghan called on American to vote in the upcoming election to “close the race and age voting gap by changing the culture around voting”.

The Duchess did not endorse any political candidate in her appearance, and spoke more generally about voter suppression and women’s rights.

She added: “When I think about voting and why this is so exceptionally important for all of us, I would frame it as: We vote to honour those who came before us and to protect those who come after us.

“That’s what community is about and that is specifically what this election is all about.”

Royals have traditionally stayed away from politics as it is considered unconstitutional for them to do so, despite no UK law prohibiting it.

Now Meghan’s remarks at the event have led to outrage from conservatives, some of who have called for the Duchess to be stripped of her title.

David Kurten, municipal politician in London, said on Twitter: “Meghan Markle on a platform with leading Democrats calling for ‘change’ in the US election is a brazenly political stance.

“She and formerly-respected husband harry are obviously no longer politically neutral and should be stripped of their Sussex titles.”

Other fans of the Duchess defended her comments for When All Women Vote.

One said on Twitter: “Such an amazing voice in encouraging positive action to help in saving America.”

Another added: “She’s Canadian and a British ex-royal AND she knows all about the struggles of US politics.”

One user responded to Mr Morgan’s original tweet by saying Meghan was simply being “passionate about her country and who gets elected”.

Meghan criticised US president Donald Trump in the past, but before she became a member of the Royal Family.

READ  Lockdown rules: What am I allowed to leave home for? | UK | News (Reports)

In 2016, she branded the then Republican candidate for president as “misogynistic” and “divisive”.

She added at the time: “You’re not just voting for a woman if it’s Hillary.

“Yes you’re voting because she’s a woman, but certainly because Trump has made it easy to see that you don’t really want that kind of world that he’s painting.”