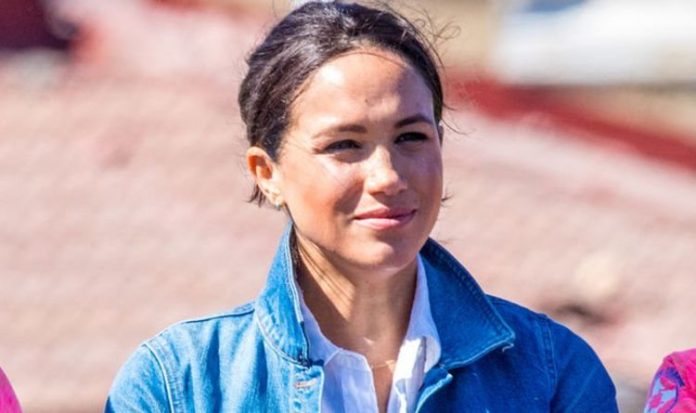 The Duchess became a patron with the charity Smart Works last year, and worked with them to launch a set of workwear for women re-joining the workforce. Meghan and Prince Harry stepped down from full time Royal Family duties on March 31. Since then, Meghan has made a series of statements intended to encourage women to vote ahead of the US presidential election.

Speaking with Smart Works clients who have found new jobs from the charity, Meghan celebrated the anniversary of her Smart Set clothing line with the charity.

She said in a video call: “People can say that so much of Smart Works is about the clothes themselves but it’s really not.

One of the clients on the call lavished praise on Smart Works for helping them when returning to work.

They said: “They really coached me and got me ready, I felt so confident.

“They sent out the clothes and they fit amazingly.

“I put them on and that was the last piece of just feeling confident.”

Earlier in August, Meghan took part in Michelle Obama’s When All Women Vote event to call on women to take part in the US election.

The Duchess hit out at voter suppression, and called on “marginalised” women to mobilise.

She added: “You know, in the fraught moment right now that we find our nation in, exercising your right to vote isn’t simply being part of the solution, it’s being part of a legacy.

“So thank you for being part of that legacy with us.”

When Meghan was still a full-time Duchess, she was invited to guest edit British Vogue.

Her September 2019 edition of the magazine emphasised Forces for Change and featured 15 women who made “an inspiring impact on modern life”.

Meghan said at the time: “Through this lens I hope you’ll feel the strength of the collective in the diverse selection of women chosen for the cover as well as the team of support I called upon within the issue to help bring this to light.

“I hope readers feel as inspired as I do, by the ‘Forces for Change’ they’ll find within these pages.”