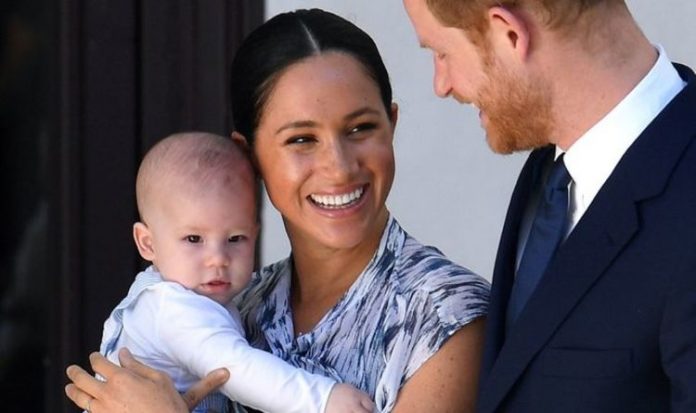 Archie Mountbatten-Windsor was born on May 6, 2019 and had a private christening at the Queen’s Chapel in Windsor Castle. The Duchess of Sussex wanted the event, which was attended by 22 guests, to be private. The royal correspondents Omid Scobie and Carolyn Durand said the Duchess “didn’t care” about the criticisms she received after wanting to keep her son out of the spotlight, according to their new biography.

The experts said the Duchess believed her role as a protective mother should come first.

Speaking in the book Finding Freedom, an insider told the experts that the Duchess said: “The same people who have been abusing me want to see me serve my child on a silver platter.

“A child who is not going to be protected and doesn’t have a title.

“How does that make sense? Tell that to any mother in the world.”

After the christening, the Sussexes released two pictures of the event.

Prince William and the Duchess of Cambridge chose to have members of the press at the christenings of their three children, Prince George, Princess Charlotte and Prince Louis.

Some critics said the Sussexes should have allowed the public to have access to the christening because the monarchy is part funded by taxpayers.

Prince Charles and the Duchess of Cornwall, along with the Cambridges, were some of the 25 guests who attended the intimate ceremony.

“Their Royal Highnesses feel fortunate to have enjoyed this day with family and the godparents of Archie.”

The second photo of the christening was taken in the rose garden at Windsor after the ceremony.

The Sussexes said Archie would not be taking a HRH title when he was christened.

But he did have a royal christening following protocol.

The ceremony was conducted by the Archbishop of Canterbury, Justin Welby.

He used the silver gilt Lily Font to perform the ceremony.

It is part of the Crown Jewels and had been brought from the Tower of London specially for the occasion.

The Lily Font was originally commissioned by Queen Victoria and Prince Albert.

The water which filled the silver gilt font was taken from the River Jordan.