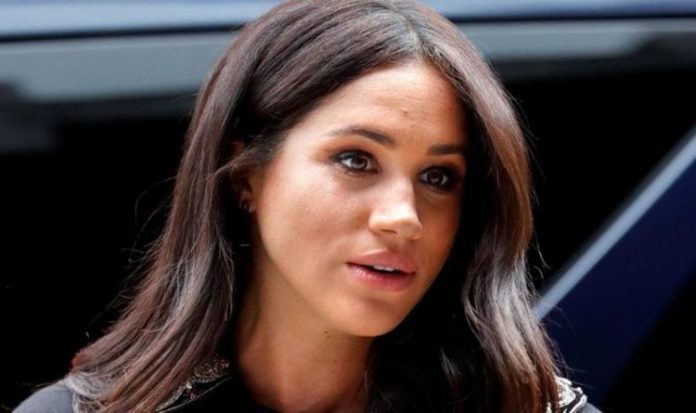 Meghan, the Duchess of Sussex, asked the question under her breath at an event with Prince Harry, Prince William and Kate, Duchess of Cambridge, journalist Sarah Sands said. The columnist said her colleague had overheard the incident which took place during a broadcast involving the two royal couples.

Ms Sands said a microphone was passed from Prince William, to the Duchess of Cambridge and then to Prince Harry.

She said the Duchess of Sussex then “icily” asked “Don’t I have a voice?”

The question was heard by people close enough to hear the Duchess, according to Ms Sands.

Writing in the Mail on Sunday, Ms Sands said: “Meghan’s ‘ordeal’ in Britain was, to her mind, the subjugation of her voice.

“A colleague who was at a broadcast by the Royal Family’s short-lived Fab Four – how poignant it is to recall the two couples looking so happy together – remembers the microphone moving down the line: William…Kate…Harry…

“Meghan, at the end of the line was disinclined to wait.

The Duke and Duchess of Sussex recently signed a multi-year Netflix deal.

The Sussexes will join other high-profile figures including Barack and Michelle Obama in signing a production deal with Netflix.

The Duke and Duchess stepped back as senior members of the Royal Family earlier this year.

After signing the deal, the Sussexes said in a statement: “Our lives, both independent of each other and as a couple, have allowed us to understand the power of the human spirit, of courage, resilience and the need for connection.

Before marrying Prince Harry, the Duchess of Sussex was an actor.

She was best known for her role in the legal drama series Suits.

But she retired from acting when she became a member of the Royal Family.

Since stepping down as a working royal, the Duchess of Sussex made a return to the screens in April when she narrated the Disney nature documentary, Elephant.