The Duchess of Sussex played a key role in the way Prince Harry has become more aware of racism, authors Omid Scobie and Carolyn Durand have said. Mr Scobie told the National Public Radio in the US: “Harry’s journey to wokeness has been very public.

“We’ve seen him learning and educating himself along the way.

“But this experience of witnessing Meghan face racist remarks and commentary would have been the first time he’d seen someone in his life or someone he was particularly close to affected by it in a certain way.”

Mr Scobie added: “We talk about some of the more obvious examples in some of the media coverage but I think that the things that have flown under the radar are some of the othering of Meghan we’ve seen.

“And I think there are things like that which Harry’s really had to become more attuned to and learn to see when it happens in front of him.

“And Meghan would have been the person that guided him on that journey.”

The authors spoke about the events which led up to the Sussexes’ decision to step down as senior members of the Royal Family.

Ms Durand said: “Harry really was looking out for his family.

READ MORE: Queen’s last words to Prince Harry before he stepped back

READ  Questions and Answers to CSSF Call for Proposals

“And I think there’ve been some people have commented that that might have been a moment where Harry was too sensitive.

“But I think we need to really look at the overall picture here and what led up to that moment. Harry was already aware of some of the murmurings that were taking place behind his back within the royal household about Meghan.”

Mr Scobie also said Prince Harry had experience negative comments from his own friends which helped to trigger the royal clash.

He added: ‘He’d also experienced some of his own friends speaking about Meghan or making negative remarks behind her back that word had travelled back to him about.

“So when William sat down and had that conversation with him, that was the starting point.”

The Duke and Duchess of Sussex said they did not participate in the making of Finding Freedom.

A spokesman for the Sussexes said they were not interviewed for the upcoming book.

The Sussexes stepped down as working royals earlier this year and are currently living in Los Angeles, California, with their son Archie. 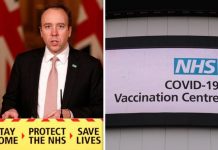