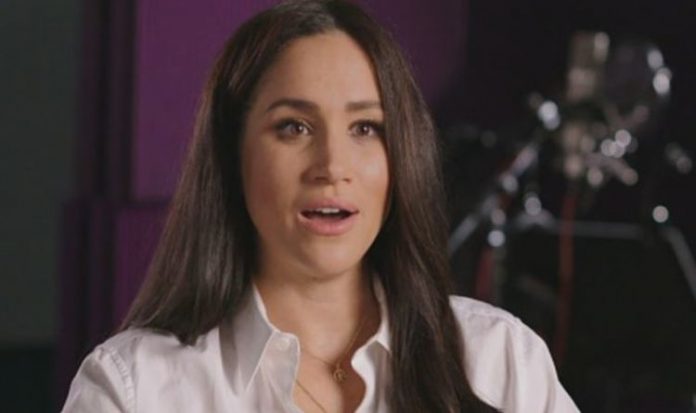 Speaking on Channel 5’s latest documentary, Meghan and Harry: The New Revelations, royal commentators reflected on Meghan Markle and Prince Harry’s side of the story based on revelations made in their unofficial biography, Finding Freedom, of which the Duke and Duchess deny any involvement. Royal biographer Andrew Morton claimed the Duchess must have been incredibly frustrated during her time in the Royal Family for her inability to openly respond to criticism.

He said: “This book is basically trying to explain how Meghan approached the Royal Family and how she was dismayed at the easy criticism of everything she tried to do.

“She has been frustrated by the fact that she has not been able to give her side of the story.

Also speaking on the documentary, Royal expert Russell Myers said: “Meghan Markle and Prince Harry were told they had to be brought within the confines of the Buckingham Palace machine.

“That is when they realised that their wings were being clipped.

“This meant they weren’t actually going to realise the stardom they had set themselves up to be.”

Echoing their comments, Viscountess Hinchingbrooke, Julie Montagu said: “This book is an opportunity for them both, in particular Meghan.

“This is for us to understand why they did step down as senior royals and why they moved across the pond.

“We can also find out what they are searching for in life.”

“He called his grandmother and said, ‘I don’t know what the hell is going on. This woman needs to make this work for my future wife’.

“And of course, we can kind of see now where this ‘what Meghan wants, Meghan gets’ narrative came from.

“Harry felt that there were those within the institution that would stop at nothing at the very least to make Meghan’s life difficult.”

But royal author Omid Scobie took to Twitter to deny claims attributed to him.

He wrote: “I’ve tried to stay off Twitter in the recent days but I need to comment on false reporting that has been attributed to me.

“I NEVER said Prince Harry ‘yelled’ or ‘shouted’ at The Queen — not in an interview or in the book. Ridiculous claim to make.”

In a separate post, he added: “The book goes into great detail about Prince Harry’s respect and admiration for The Queen, so it really bothered me to see this kind of reporting put out there as it’s so far from what is described on the pages.”