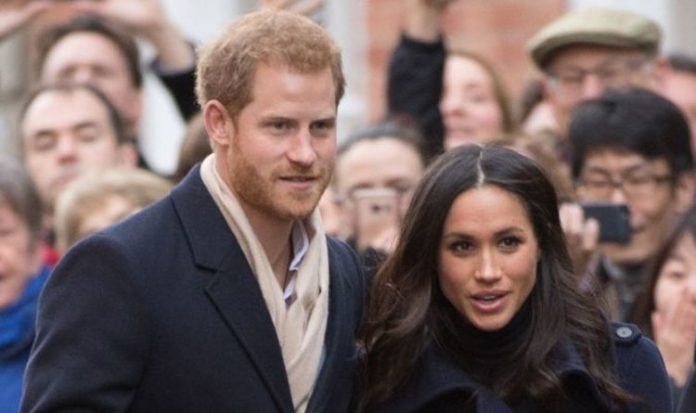 The Duchess of Sussex reportedly took a two-hour lesson with an etiquette expert before her first meeting with the Queen. And following their engagement, Prince Harry said he was confident Meghan would have what it takes to be a successful working member of the Firm.

But royal author and expert Penny Junor has suggested that having grown up in the US, Meghan would have found it difficult to get her head around the enormous expectations the British public place on members of the Royal Family.

Just weeks after relocating to Britain, Meghan became engaged to the Queen’s grandson.

And by the time she was introduced to the world as Harry’s fiancée she had visited the UK only a handful of times.

Ms Junor told Express.co.uk: “I think the problem was that Meghan didn’t understand the British Royal Family and what the British people expect from them.

Harry introduced Meghan to the world as his girlfriend in 2017 (Image: GETTY)

“We are two countries divided by a single language… but that is the problem, we think that we are the same as the Americans and we’re not, just because we speak the same language.

“I think they just don’t get the way we regard our Royal Family or even the etiquette and the protocol surrounding them.

“It’s something that if you grow up in Britain you absolutely understand.

In November 2017, Harry spoke of his relief when discussing how well-prepared he believed Meghan was for royal life.

He told the BBC he had no qualms about thrusting her into the role, given her eagerness to get stuck into the job at hand.

The Duchess of Sussex moved to the UK shortly before her engagement (Image: GETTY)

The prince said: “I know the fact that she’ll be really unbelievably good at the job part of it as well is obviously a huge relief to me because she’ll be able to deal with everything else that comes with it.”

The Duke explained how early on in their relationship, he sat Meghan down for a candid conversation about her future as his spouse would look like.

He said: “I still had to have some pretty frank conversations with her to say ‘look, what you’re letting yourself in for is a big deal and it’s not easy for anybody.’”

But less than two years into their marriage the Sussexes bowed out of royal life after telling ITV’s Tom Bradby about their struggles in the spotlight.

In interviews while on their royal tour of southern Africa, the pair showed clear signs they were fed up with the way things were going for them and the Duchess spoke out against the level of scrutiny she had been under from the press.

Ms Junor believes that if the couple had waited it out things would have gotten better for them.

She said: “I think that had they stuck with it and just got on with the work the tide would have turned, because the tide had turned.

Meghan said she felt excited about her new role before marrying into the Royal Family (Image: GETTY)

She did not predict any big changes for the couple when their Megzit deal with the Queen will be reviewed in March.

The royal biographer said given the fact they have bought an £11 million mansion in Montecito, California, and have signed mega deals with Netflix and Spotify, they appear to be eyeing up the US as their long-term home.

“I think they probably are there for the long run. I would be very surprised if they now came back. I think they’ve decided that’s where their life will be.”