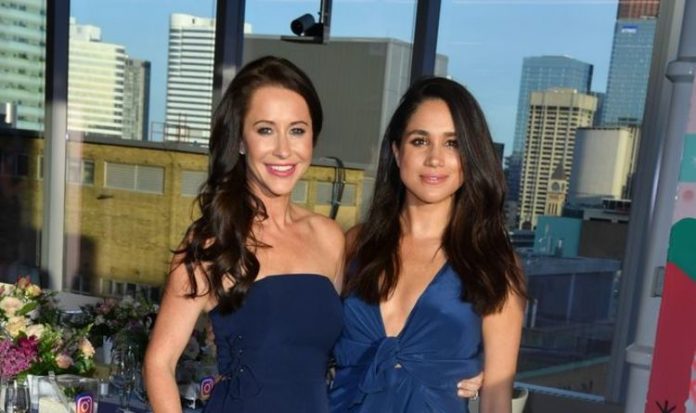 After returning to social media in August, Mrs Mulroney hit back at previous reports she and Meghan had fallen out over the issue. She said on her Instagram story: “I’m going to tell this once and for all. Meghan and I are family.

“She is the kindest friend and has checked up on me every day.

“Tabloid culture is atrocious. It creates lies and hurtful storyline. Stop feeding into it. Done.”

Now, following months of silence, the Canadian stylist and close friend to Meghan has spoken out about what happened after she was accused of “textbook white privilege” by a fashion influencer.

Speaking to the Post, Ms Mulroney shared how she felt after the accusations led to her being axed by Canadian network CTV.

She said: “I still feel a lot of shame. I feel that people believe the worst in me.”

In June, lifestyle blogger Sasha Exeter explained in a video shared to her Instagram page that Ms Mulroney “took offence” when she called on her fans to speak up about the Black Lives Matter movement.

Ms Mulroney then allegedly reached out to brands telling them that Ms Exeter had “treated [her] unfairly,” causing Ms Exeter to be “paralysed with fear”.

The So Sasha blogger said at the time: “For her to threaten me ― a single mom, a single black mom — during a racial pandemic blows my mind.”

The Good Morning America then issued a public apology on Instagram, promising to “do better” in future.

Ms Mulroney wrote: “I want to say from my heart that every word of my apologies to Sasha over the course of the last two weeks privately, and again both publicly and privately today is true.

“I did not intend in any way to jeopardise her livelihood. We had a disagreement and it got out of hand. For that I am sorry.”

She added: “I’m going to be stepping back from social media in the coming day and giving my microphone to Black voices. I plan to use this time to reflect, learn and listen.

“I want you to know that I’m committed to using every platform and resource available to me to continue the important work of anti-racism. I hope you will all continue to hold me accountable.”

This comes after Ms Mulroney hit back at “a**s” who turned their back on her during the row.

She previously Mulroney posted a picture of her and her husband Ben.

She wrote: “After a few rough months, something to finally celebrate. Thank you for being by my side Benny. Thank you to our true friends for sticking by us. We could never have made it without you.

“Silver lining: We finally know who the a**s who we thought were our friends. Best gift we could have ever been given.”

The couple celebrated their 12-year anniversary on October 30th this year.