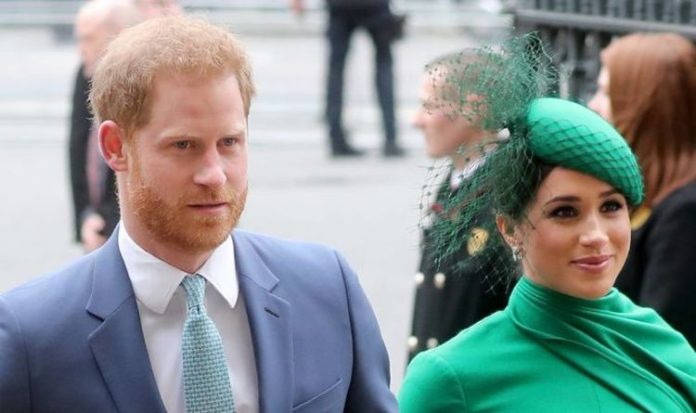 The Duke and Duchess of Sussex announced yesterday their production company Archewell Audio has gone into partnership with the Spotify streaming service. This is estimated to be worth around £18 million for their charitable body Archewell. Their announcement came a few months after the couple also signed a Netflix deal to produce a range of programmes and series, believed to be worth more than £112 million.

But their announcement appeared to be puzzle some social media users over their choice of name for their charity.

One person said: “There’s a Harry/second-child mystery around Archewell.

“What is the plan for a foundation for Harry and Meghan’s second child?

“It would hardly be fair to not have a foundation each.”

Meghan and Harry stepped down as senior members of the Royal Family in March, which involved shutting down their previous Sussex Royal brand on Instagram and Twitter.

Shortly afterwards in April, they announced in a statement their new foundation would be called Archewell.

They also explained the name held significance as it referenced their son Archie.

They said: “Before SussexRoyal, came the idea of Arche – the Greek word meaning source of action.

Meghan also spoke about Archewell in September during her appearance at the Fortune’s Most Powerful Women virtual summit.

She said one of the aims of Archewell would be to work towards creating a kinder and more humane online experience.

She said: “Part of our focus with the Archewell Foundation is to just ensure that we are helping foster healthy positive communities — online and off — for our collective wellbeing.

“I think that is one clear tangible thing that everyone could be doing.”
Meghan also made her first public appearance since announcing she shad suffered a miscarriage in July.

Speaking on a video message for CNN Heroes TV special, she celebrated the “quiet heroes” who supported those facing food insecurity during the COVID-19 pandemic.

She did not mention her miscarriage in the video, but said this year had been “a year that has been universally challenging for everyone”.

The Duchess was previously praised for her honesty in The New York Times, where she said her heart was “shattered” by the loss, but she wanted to help break down the stigma of talking about miscarriage.

She also described how she was looking after Archie one morning in July when she felt “a sharp cramp”.

She wrote: ‘I knew, as I clutched my firstborn child, that I was losing my
second.

“Hours later, I lay in a hospital bed, holding my husband’s hand.”