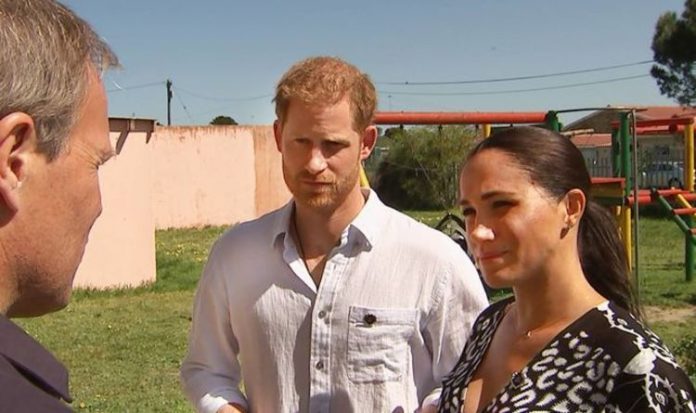 The Duchess of Sussex spoke candidly about the challenges of motherhood to ITV’s Tom Bradby, just months after giving birth to her first son Archie. She appeared to well up when asked if it had been a struggle. And now a year later, Meghan explained she was “exhausted” during the interview and was just about to give Archie a bath.

During an appearance on the podcast Teenager Therapy to mark World Mental Health Day on Saturday, one of the hosts asked Meghan: “How are you?”

She replied: “Isn’t that funny ― it was about a year ago that someone asked me that.

“We were on a tour in South Africa, and on the last day of the tour, man I was tired.

“I was just about to give Archie a bath. I was exhausted.”

Meghan Markle has explained why she was struggling in South Africa (Image: ITV)

Last October, Meghan and Harry embarked on a tour around South Africa, where they spoke about troubles behind the scenes as members of the Royal Family.

The Duchess said at the time: “Not many people have asked if I’m OK, but it’s a very real thing to be going through behind the scenes.

Harry also said during this weekend’s podcast that Meghan was breastfeeding Archie at the time, who was born on May 6 in 2019.

Meghan then added it was “like running a marathon”.

She said: “Between every official engagement, I was running back to make sure our son was fed.

“But at the end [of filming for a documentary], the journalist asked me if I was OK.

“And I didn’t realise that my answer would receive such an interest from around the word.

“I didn’t think about that answer. I just answered honestly.

Meghan also explained that she is now “doing well” a year later.

She said: “I think it speaks to the fact that the reason it resonated with people is because everyone wants to be asked if they’re OK.

Following the couple’s tour of South Africa, they spent six weeks in Canada.

They then dramatically announced they were stepping down as members of the Royal Family in January.

Now they are living in Santa Barbara, California and have recently signed a £112 million deal with Netflix.