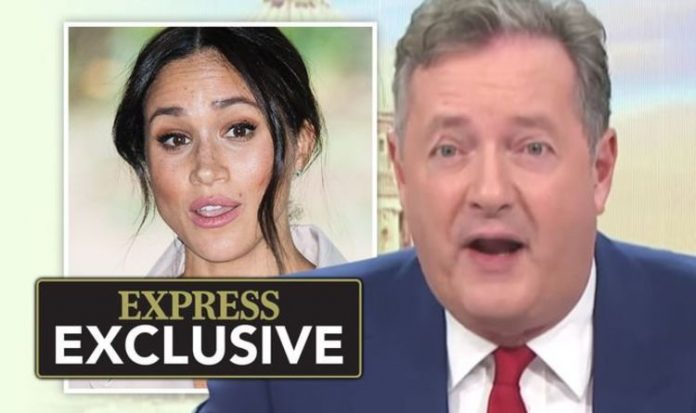 Piers Morgan has hit back claiming he is not “obsessed” with Meghan Markle, after coming under fire for commenting on the Duchess’ every move. But in an exclusive interview with Express.co.uk the journalist explained why he talks about Meghan so often – and said it is not about a personal obsession with her.

Mr Morgan told this website he simply comments on the Sussexes a lot because they are a big news story.

He said: “I think along with Donald Trump, Brexit and coronavirus, the Sussexes have made themselves one of the biggest news stories in the last three years and they don’t want to be left alone.

“So I don’t really understand the criticism; I’m a columnist, I’m on TV every morning, I’m on Twitter all the time, obviously they are the fourth biggest story of the past three years so obviously I’m going to be commenting about it.

“And because of my own knowledge about Meghan Markle and previous, what I assumed was, friendship has given me a bit of an insight into what she is like.

“I don’t have any obsession with her…

“I don’t think my criticisms of her are anything other than genuinely valid criticisms of a couple who just want to have their royal cake and eat it.”

Critics have attacked Mr Morgan due to the constant remarks.

Some have even claimed his censure of the royal is based on her ditching his friendship.

JUST IN: Meghan Markle and Prince Harry’s new website has a hidden message

Mr Morgan told this website he was once friends with Meghan, but she soon ditched him and moved on.

He said: “I can certainly say that after personal experience when she wanted my advice on handling the media and stuff she can turn on the charm when it suits her but the moment you are of no use to her you’re gone.”

Mr Morgan further criticises the Duke and Duchess of Sussex in his new book, Wake Up.

In the book, the journalist charts the key dates and events of 2020 and accused both Meghan and Harry of being “self-obsessed”.

He said: “It’s sadly, pathetically clear that all the Sussexes care about, like so many self-obsessed privileged wokies, is themselves.

“They live in a me-me-me bubble that doesn’t allow for anything more important, like the worst-global pandemic in a century, to interfere with their self-promotion.”