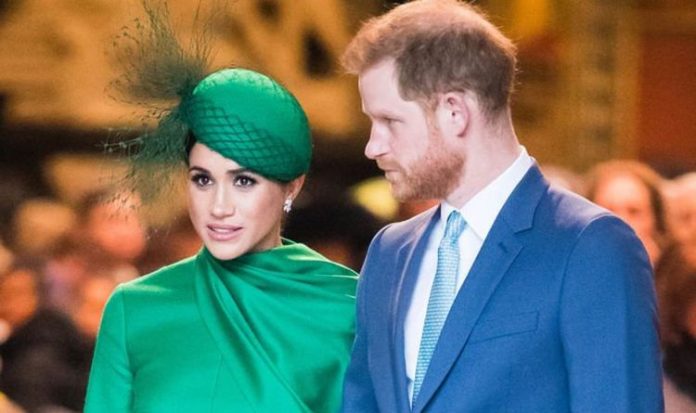 Despite Megxit, Meghan Markle could still become Queen Consort if Harry takes the crown, a royal expert has warned. Despite the unlikelihood of such a sequence of events occurring, royal expert Hugo Vickers said Harry should rule it out completely by relinquishing his place in the line of succession to the throne.

Tensions between the Sussexes and the rest of the Royal Family has erupted in recent days due to the latest twist in the Megxit saga.

He wrote in the Daily Mail: “As the sixth in line to the throne, it would take a catastrophic turn of events for him to be called upon as King.

Meghan Markle news: Harry has been told to renounce his position in the line of succession (Image: GETTY)

Meghan Markle news: The Queen acceded to the throne in 1952 (Image: GETTY)

Mr Vickers branded this scenario “not a comfortable prospect” in light of the roles and financial freedom Meghan and Prince Harry have carved out for themselves after stepping down as full-time working royals.

The expert also said “no one wants” Meghan to be crowned Queen Consort.

Mr Vickers added: “Then there is the prospect of Queen Meghan, which no one wants.

“The idea that she could end up representing our country is impossible. It simply cannot be.”

The expert said the Queen would look vindictive, “something she is most certainly not”, if she moved in favour of removing Harry from the line of succession.

He said: “Today, the Queen finds herself in a delicate position – one of Harry’s making.

“Her Majesty cannot remove her grandson from the line of succession without it seeming vindictive, something she is most certainly not.

“Duty comes first, but she is fond of her family.

“Yet the alternative, that Harry maintains a claim to the throne, is equally unthinkable.

“Harry has already made it very clear that he was unhappy in his role as a working member of the Royals.

“So why would he not take the final step and move aside?”

Neither the Queen nor Prince Harry alone have the power to modify the line of succession to the throne.

Meghan Markle news: The line of succession to the throne (Image: EXPRESS)

However, as King Edward VIII did in December 1936, he can express his desire to relinquish his and his children’s position and have Parliament to vote on it.

This decision would need to be approved also by the governments of the other 15 realms where the Queen is head of state.

While they have retained their full titles and position in the line of succession, they can’t use their HRH styles nor carry out royal duties.

Last Friday, the Queen made public her decision to strip the Duke and Duchess of Sussex of all their royal and military patronages, saying it is not possible for them “to continue with the responsibilities and duties that come with a life of public service” as non-working royals.

The Duke and Duchess issued their own statement a few minutes later in which they appeared to disagree with the Queen.

Their spokesman said: “As evidenced by their work over the past year, The Duke and Duchess of Sussex remain committed to their duty and service to the UK and around the world, and have offered their continued support to the organisations they have represented regardless of official role.