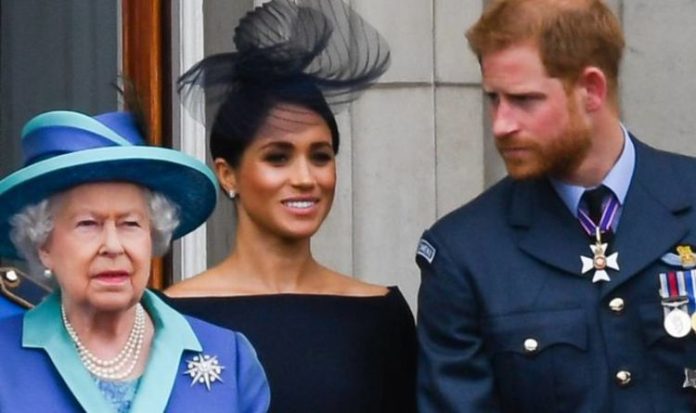 The Duke and Duchess of Sussex set out their goal to “build a better world” as they effectively launched the website of their non-profit organisation Archewell. On the homepage of the Archewell website is a picture of Diana, Princess of Wales with son Harry on her shoulders, while in another monochrome image a young Meghan stands as her mother Doria Ragland crouches down to hug her daughter. This resulted in many commentators criticising the couple for not including Prince Charles in the picture, despite his own charitable efforts including him setting up the Prince’s Trust to help vulnerable people.

Good Morning Britain host Piers Morgan claimed the message was “shameful” and called for the Queen to remove their titles when their 12-month royal review since stepping down as senior royals arrives in March.

Express.co.uk readers were asked between 11.05am and 11pm yesterday whether the Queen should strip the couple of their titles.

Only 1,683 (seven percent) readers were against this.

One person wrote: “The USA might enjoy have a Duke and Duchess living on their shores for the novelty of it.

“However, when the true cost of their upkeep surfaces, they might think differently.

“Monarchy and Hollywood stars are not the same thing.”

READ MORE: Queen to ‘clip wings’ of Harry to allow him to return for royal events

“We have experienced compassion and kindness, From our mothers and strangers alike.

“In the face of fear, struggle and pain, it can be easy to lose sight of this.

“We invite you to join us. As we work to build a better world. One act of compassion at a time.”

Archewell is expected to focus on the critical issues the couple have been championing during the pandemic and before – racial justice, gender equity, climate change, mental health, online hate speech and empowering diverse voices.

The foundation’s partnership with a range of academic and tech organisations will include financial support.

“It’s a place where compassion matters, communities gather, and storytelling is the engine.

“The website has been updated to reflect the work Archewell has undertaken throughout 2020 and to create a place for people and communities around the world to share their stories.”