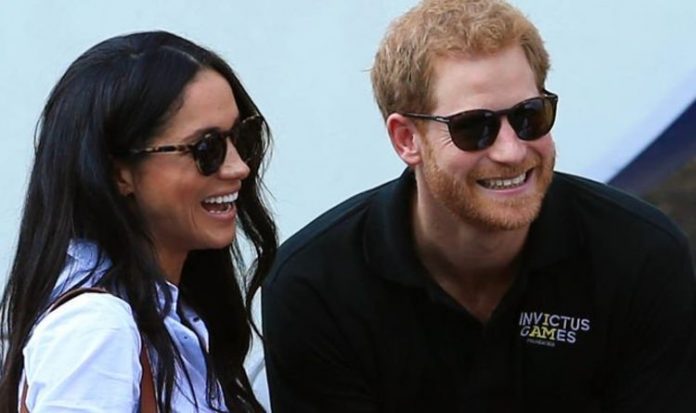 Meghan and Prince Harry bought their first property in Santa Barbara, California, it has been revealed. And members of the so-called Sussex Squad, the close-knit group of fans of Meghan and Harry on social media, have come together to congratulate the pair on the happy news.

One, Emily Galimba, highlighted how the purchasing of the family home comes ahead of Prince Harry’s birthday – the first since he stepped down as senior royal.

She wrote: “Well done Harry, considering that it is your first birthday stepping back as senior royal.

“You purchased a property with your own money for your family.

“Nicest gift you can give to yourself, Meghan and Archie to begin with.”

Another royal fan, with the nickname Smile_B, said: “All the best Harry and Meghan.

“Do everything you can to stay away from evil Britain devil’s! Stay blessed and happy forever”.

A third, Busiswa G, expressed her happiness saying: “Those who have purchased their first home one time or other knows the undiluted JOY when you get your keys and you walk around the house screaming to no one per se but you never have the same kinda joy in your next house purchase. So happy for them.”

Meghan and Harry quietly moved into their new home in early July, their spokesman revealed overnight.

He explained: “They have settled into the quiet privacy of their community since their arrival and hope that this will be respected for their neighbours, as well as for them as a family.”

A source close to the couple added they are planning to lead a life as normal as possible at their new base in Santa Barbara, some 100 miles north of Los Angeles.

They told the Daily Telegraph: “They have thought about this carefully and researched it well.

“This is the place where they plan to be happy, make good friends and bring up Archie, giving him the chance to play with other children his age.”

Despite reports claiming the Prince of Wales would continue to offer the couple his financial support until they obtained a stable source of income, Meghan and Harry didn’t take advantage of his help to buy their first home, the newspaper added.

In fact, they purchased the £11.1 million property solely with their own funds and through a mortgage.

After having lived in four different houses since 2017, the couple are said to have all the intentions to settle down in Santa Barbara.

A source told the New York Post’s Page Six column: “They are not houseguests of Oprah or anyone else, they bought this home themselves.

“This is where they want to continue their lives after leaving the UK.

“This is the first home either of them has ever owned.

“It has been a very special time for them as a couple and as a family, to have complete privacy for six weeks since they moved in.

“They intend to put down their roots in this house and the quiet community, which has considerable privacy.

Prior to their home purchase, the couple had spent their past few months as guests at producer Tyler Perry’s home.

In the mansion, Meghan and Harry had continued to work on their organisation yet to be launched, Archewell.

The couple also focused their attention on projects regarding the Black Lives Matter movement and supported their patronages affected by the coronavirus pandemic.