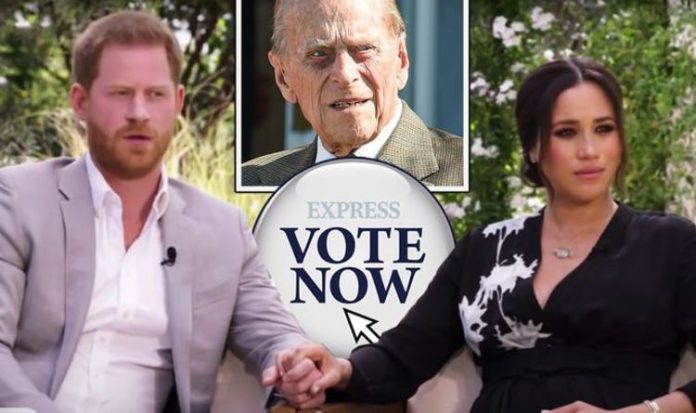 Meghan Markle and Prince Harry have already appeared in a 30-second trailer for the interview, which was teased earlier today by US broadcaster CBS. The chat with Oprah has already been pre-recorded and is scheduled to air at 8pm ET on March 7 (March 8 at 1am GMT). Meghan and Harry’s interview comes as the Duke’s grandfather, Prince Philip remains in hospital.

Earlier on Monday, it was announced the Duke of Edinburgh had been moved to a second hospital where doctors will continue to treat him for an infection.

Philip is now being treated at St Bartholomew’s Hospital, located near St Paul’s Cathedral in London.

As a result, do you think Harry and Meghan should delay the interview while Prince Philip is in hospital?

Buckingham Palace said in a statement: “The Duke of Edinburgh was today transferred from King Edward VII’s Hospital to St Bartholomew’s Hospital where doctors will continue to treat him for an infection, as well as undertake testing and observation for a pre-existing heart condition.”

But the Palace has not detailed what kind of infection the Duke is suffering from.

The palace statement added: “The Duke remains comfortable and is responding to treatment but is expected to remain in hospital until at least the end of the week.”

The Queen’s husband was first admitted to King Edward VII Hospital on February 16, as revealed by Buckingham Palace on February 17.

At the time, his representative said the Duke had been admitted for “observation and rest” after saying he was “feeling unwell”.

He added: “My biggest fear was history repeating itself.”

Last year the Duke and Duchess of Sussex decided to step down as senior members of the Royal Family and have since moved to Santa Barbara, California.

The pair are still known by their Sussex titles, but they agreed not to use their official HRH titles.

In a recent decision by the Palace, the couple has also been stripped of their royal patronages and Harry was relinquished of his honorary military titles.

The interview with Oprah will mark the pair’s first sit-down interview since Megxit.

CBS has said the chat will touch upon a wide range of topics – including motherhood, Meghan’s arrival in the US, her life under the public eye and the Sussexes’ hopes for the future.

The prime time show was first said to last 90 minutes, but the programme will now last for two hours.