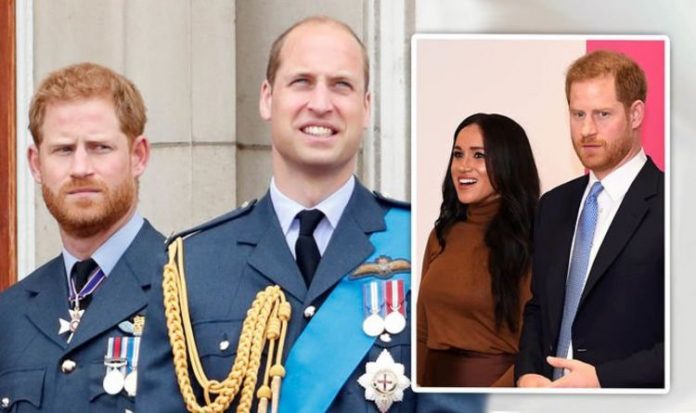 Meghan awakened Prince Harry to “the injustice” of being judged harshly for youthful misbehaviours – despite Prince William being just as keen to party, according to royal biographer Robert Lacey. He told Vanity Fair: “He and William both misbehaved but Harry was blamed for everything.

“He became resentful of the stereotyping in the media.

“I think Meghan helped him to see the injustice of that, put it in words and react against it.

“Her arrival was a crucial moment.”

Harry gained the notorious reputation of being an out-of-control partier in the early 2000s.

However, Mr Lacey noted, it had been William who turned the basement at Highgrove House into ‘Club H’, where the brothers would invite their friends from Eton and have parties.

William and Harry shared many friends and often partied together.

However, William’s reputation was never at risk, with little gossip about how he would spend his spare time or nights out.

Insiders, Mr Lacey said, Harry resented how William didn’t receive as much negative feedback as him, despite behaving in a similar way.

Differences between the two brothers had appeared years before the creation of Club H.

Prince William and Prince Harry realised as young children they were destined for two different futures, according to Mr Lacey.

In his book Battle of Brothers, the author wrote about Prince Harry playing up in the car.

After being reprimanded by the nanny, he reportedly said: “I don’t have to behave, I’m not going to be King.”

Mr Lacey said: “One of the things that I dwell on in the book is how in their teens, and going back to their childhood, they were aware they were on different paths.”

Much like Prince Harry, Prince William became keenly aware of his future role since the beginning of primary school.

As Mr Lacey wrote in his book, the now-Duke of Cambridge went from being a naughty child to a more relaxed and calm one after growing to appreciate his destiny.

The young royal found great strength from the knowledge he would one day become King, Mr Lacey added.

Prince William’s commitment to duty and the Crown may even have interfered with his relationship with Prince Harry, Mr Lacey wrote.

The expert investigated in his book the moment when the relationship between the brothers was compromised.

Mr Lacey believes Prince Harry was hurt when his brother showed concern about the speed at which he was moving in the relationship with Meghan.

The author wrote: “Harry could not help but wonder whether Wills was really concerned about his personal happiness – or whether he was, once again and as per usual, thinking about the make-up and fortunes of ‘the Firm’ whose boss he would become one day?”