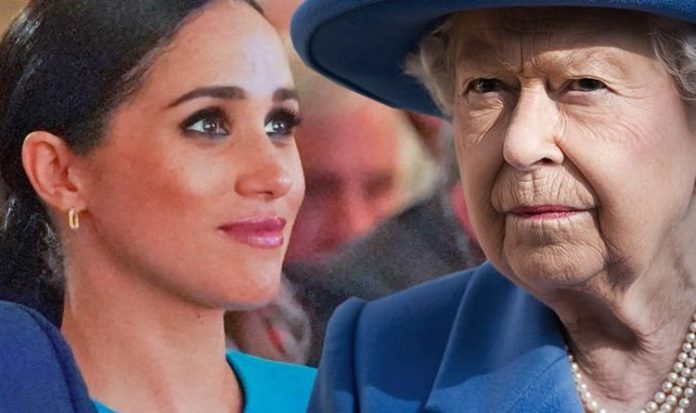 Meghan and Prince Harry have been largely absent from the UK in 2020. The coronavirus pandemic and subsequent lockdown has made visits more difficult, however the pair earlier this year rescinded their royal titles and announced that they would split their time between the US and Britain. It came as reports suggested a rift between the two and the rest of the Firm had opened beyond repair.

Speculation was particularly intense around the relationship between Harry and his brother Prince William, and Meghan and Kate, Duchess of Cambridge.

It was floated that Harry and Meghan were furious at being pushed to the sidelines as William and Kate prepared for their future roles of King and Queen consort.

Things were made all the more worse following Harry and Meghan’s royal tour of South Africa, in which the pair gave a bombshell interview over how they had struggled with the limelight and intensity royal life had brought them in recent years.

A tide of backlash ensued, with one notable appearance from journalist Victoria Mather on MSNBC news causing a furore in Meghan’s defence.

It came as Ms Mather said: “I think what has really upset the British public is that Meghan Markle, who many people consider is only five clicks up from trash, has actually tried to disrespect the Queen.”

Reacting to the news on The View, the talk show hosts were furious, with Joy Behar explaining: “Meghan Markle is still a Duchess – that was really shocking, what an idiot, a stupid woman.”

Meanwhile, Sunny Hostin said: “It was just loathsome and shocking and despicable, when I first saw that I thought to myself ‘my goodness, that is why they are leaving the UK’.

“You’ve heard all of these things about how Duchess Meghan had been treated and maybe perhaps it was overblown – well no, it wasn’t overblown, because that is how she was treated.

To do this, the pair have had to relinquish their royal funds.

Many were initially sceptical at how the pair could continue to live the lifestyles they were so used to should they not have a royal income.

In September the pair signed a multi-year deal with Netflix to make TV series’, films and children’s shows thought to be worth more than $100m (£74m).

Many have noted that the private life Harry is heading towards is something he has always wanted.

In 2017, while talking to Angela Levin, Harry revealed several occasions in which he “wanted out” of the Royal Family in the preceding years.

He said the time he spent in the Army, where he was “just Harry”, was “the best escape I’ve ever had”.

Although, he admitted to reevaluating his decision to leave, opting to stay on in order to “do good”.

He explained: “I spent many years kicking my heels and I didn’t want to grow up.

“I felt I wanted out but then decided to stay in and work out a role for myself,” signalling his support for and loyalty to the Queen.

On the family, he said: “We don’t want to be just a bunch of celebrities but instead use our role for good.”