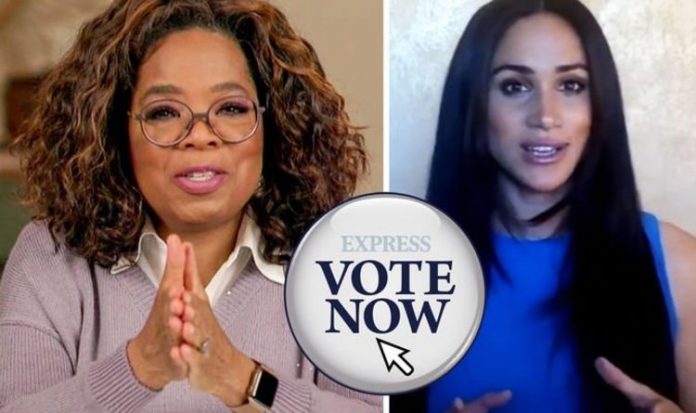 Vote in our poll on whether you will boycott the Duke and Duchess of Sussex’s Oprah interview. And tell us more about what you think in the comments section.

Our poll comes as Meghan and Harry’s interview with the US chat show host airs next week.

It marks almost a year since the anniversary of Megxit on March 31, which saw the couple quit royal duties for a new life in America.

Earlier this month, the Sussexes confirmed they would not be returning as working royals.

Former actress Meghan will open up to Oprah about joining the Royal Family.

She will then be joined by Harry to discuss their move across the pond and future plans.

US television network CBS described the programme as an “intimate conversation”.

It said in a statement: “Winfrey will speak with Meghan, the Duchess of Sussex, in a wide-ranging interview, covering everything from stepping into life as a royal, marriage, motherhood, philanthropic work to how she is handling life under intense public pressure.

As they launch new careers, they have signed lucrative deals with Netflix and Spotify to make shows and podcasts.

Their first podcast – which featured a short appearance from Archie – was released in December.

It was confirmed earlier this month that Meghan, 39, and Harry, 36, would not be returning to their old lives.

They were stripped of their royal patronages, while former soldier Harry also lost his beloved honorary military titles.

Royal expert Angela Levin claimed the Queen is likely to be “very concerned” about their Oprah interview.

The royal author, who has written a biography on Harry, said: “When senior members of the Royal family say too much or say things that the Queen thinks are wrong the whole family is affected by it.

“I think she is very concerned about what the interview with Oprah Winfrey will reveal.

“There’s been a lot of publicity saying that it’s going to be a tell-all, no-questions-barred, and I think she’s concerned about how that would be, and she’s got to protect the Royal Family.”