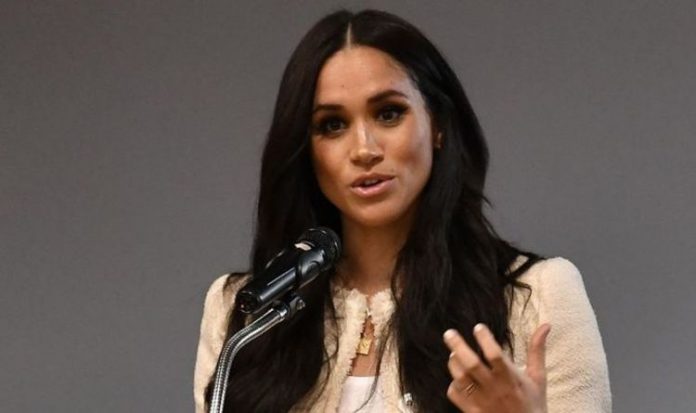 The Duchess of Sussex was among the speakers at a virtual summit encouraging American women to their say at the November ballot. Following the event organisers of the When We All Vote online meeting released a statement thanking Prince Harry’s wife for her powerful contribution.

They said: “We reached 300,000 new voters during our couch party with @USOWomen and @glamourmag.”

The organisers addedthey “couldn’t have done it without Meghan, the Duchess of Sussex”.

Meghan was not shy about her passion for the subject during her rousing speech at last week’s event.

The mother-of-one said: “We are recognising the 100th anniversary of the 19th amendment which of course gave women the right to vote but not all women, and specifically not all women of colour.”

However, her appearance at the summit which aimed to increase women’s participation in the November 3 election has split opinion due to her previous position as a senior royal.

While some praised Meghan for using her platform to encourage women to play an active part in their country’s politics, others said her political speech had been a step too far.

Some commentators and fans were particularly annoyed Meghan had used her royal title when taking part in the event.

Members of the Royal Family are required to remain strictly neutral on political matters and choose not to vote.

“Because we all know what’s at stake this year.

“I know it, I think all of you certainly know it, and if you’re here on this fun event with us, then you’re just as mobilised and energised to see the change we all need and deserve.

“This fight is worth fighting and we all need to be out there mobilising to have our voices heard.”

She added: “When I think about voting and why this is so exceptionally important for all of us, I would frame it as: We vote to honour those who came before us and to protect those who come after us.

“That’s what community is about and that is specifically what this election is all about.”

President Trump will make a crucial pitch for a second term in the White House on Thursday with a keynote address at the Republican National Convention highlighting his record in office and charting a path for the next four years.

His speech on the White House South Lawn, a controversial location for a partisan event, will cap a four-day convention that has portrayed him as a leader who can restore order after months of protests over racial injustice and revive an economy ravaged by the coronavirus pandemic.

With just over two months before the vote, Democratic former Vice President Mr Biden is leading in opinion polls partly because of public discontent with President Trump’s handling of the health crisis.