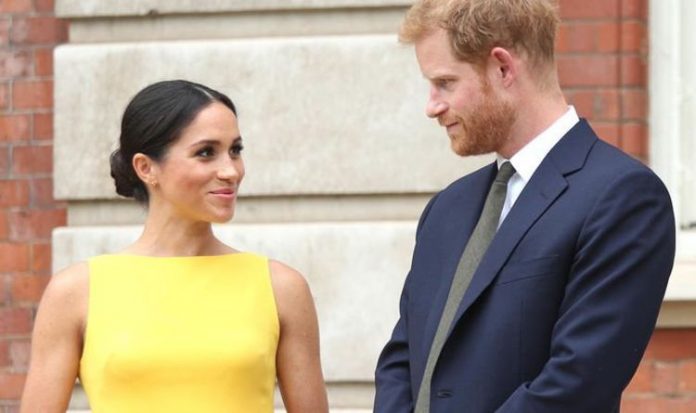 Meghan and Harry’s move to a new home has been interpreted by some as an indication the Duke and Duchess of Sussex are planning to have a second child. Meghan and Harry moved into the first home they purchased together in early July, it has been confirmed.

After having spent their first four months free from royal duties as guests at Tyler Perry’s mansion in Los Angeles, the couple and their one-year-old child now live in quiet Santa Barbara.

The new home – as well as claims the couple are planning to live there for a very long time – have sparked a frenzy among social media users, believing this is the Duke and Duchess of Sussex’ first step to prepare for a second baby.

One social media user said: “All I know is that Archie is getting twins baby sisters.

READ  Brexit: Mayor says riots over second referendum would be WORTH IT | Politics | News - UK

“Because that house is just perfect for one or two more kids.

“Setting down roots and moving on with their lives!

“Now I just want them give Archie a sibling”.

Prince Harry famously hinted at the couple’s desire to have a second child in the September issue of British Vogue.

As he was interviewing primatologist Jane Goodall on climate change and conservation, the Duke of Sussex said he wanted to have two children “maximum”.

Archie, who was born at a London hospital in May 2018, spent his first few months at Frogmore Cottage in Windsor.

Meghan Markle and Prince Harry with Archie at a charity polo match in July 2019 (Image: GETTY)

The little Sussex also lived, between mid-November and March, in a mansion in Canada’s British Columbia.

Archie’s well-being appears to have been at the forefront of Meghan and Harry’s concerns when they purchased their new home.

Royal commentator Omid Scobie, who also co-authored the newly-released biography of the Sussexes Finding Freedom, told ET online: “It is a peaceful home.

“It’s a forever home and somewhere where they’ll lay their roots.

“It has space for Archie, a playground.

“Really, it’s gonna be a special part of their life.”

The Sussex mansion is located in Montecito, a secluded area in peaceful Santa Barbara, some 100 miles north from Meghan’s mother Doria Ragland’s home in Los Angeles.

Mr Scobie also spoke about how Meghan and Harry, who stood down as full-time senior royals only in late March, have paid for their new home.

He said: “Finding a house in the middle of a pandemic is difficult, but they were able to find a peaceful home in Santa Barbara.

“A home that they have bought with their own money.

Meghan Markle and Prince Harry first lived together on the grounds of Kensington Palace (Image: EXPRESS)

“There’s been a lot of speculation about Prince Charles potentially funding this.

“But this is really a moment for them to find their independence.

“They’ve done this on their own.

“Both of them are extremely liquid when it comes to their assets.

“Harry brings a lot to the table himself and Meghan lives off residuals from Suits and the many appearances that she’s done in other projects too.

Meghan and Harry’s son Archie was born in May last year (Image: GETTY)

“They focus very much on their philanthropic work, but we have seen them sign with the Harry Walker Agency, they’ll be taking on a lot more smart speaking engagements as a couple and separately.

“But from what I’m told from sources, all of that work will still have the same social impact.

“We won’t see them endorsing products or taking on sort of fluffy ventures.

“Everything will still revolve around the issues that are important to them.

“I can see them following a path not that dissimilar to the Obamas when they left the White House.”