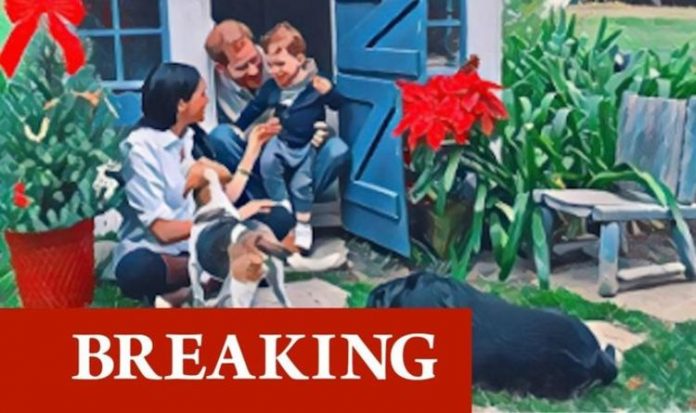 The highly anticipated card seems to show Archie, one, Meghan, 39, and Harry, 36 at home in their garden in Montecito, Santa Barabara.

Mayhew shared the image in a tweet which read: “We’re thrilled to receive wonderful Christmas wishes from our Patron, The Duchess of Sussex, who also made a personal donation, helping dogs, cats and our community.

“From all of us at Mayhew, thank you and Merry Christmas.”

As well as the illustration, the Sussexes’ card features the message: “Wishing you a very Merry Christmas and a Happy New Year.”

The card also features the family’s two rescue dogs in a sweet nod to charity Mayhew.

The release of Meghan and Harry’s Christmas card came days after senior royals shared theirs with the public.

This Christmas will be the Sussexes first since they exited the Royal Family in March.

Reflecting on Meghan and Harry’s extraordinary year, one royal commentator claimed the couple will feel “satisfied” this Christmas.

Royal commentator Richard Fitzwilliams told Express.co.uk:  “I think the Sussexes will feel a sense of satisfaction this Christmas after a turbulent year.

“They wanted a change and have achieved it, though it involved a crisis for the monarchy.

“It was a high price to pay and they have been forever in the news since they stepped down as senior working royals after the Sandringham Agreement with the Queen, which they were far from happy with as the could not be part-time royals or use Sussex Royal.

“I think that they will enjoy their Christmas in Los Angeles with Archie and Meghan’s mother Doria is expected to join them.”

Mr Fitzwilliams added: “Had it been able to go ahead, the traditional royal Christmas at Sandringham is an occasion which involved the rituals and traditions that they, particularly Meghan, found so stressful when they were senior working members of the royal family and they would not, after a turbulent year, have found Christmas with the rest of the royal family relaxing.”

Meghan and Harry were expected back in the UK for a visit with Archie over the summer but the trip was suspended amid the Covid-19 pandemic.

Archie has not been in Britain since last November and it remains unclear when he might next visit.

The Queen and Prince Philip may be missing all their grandchildren and great-grandchildren this Christmas as they prepare to mark the holiday alone at Windsor Castle for the first time in 33 years.