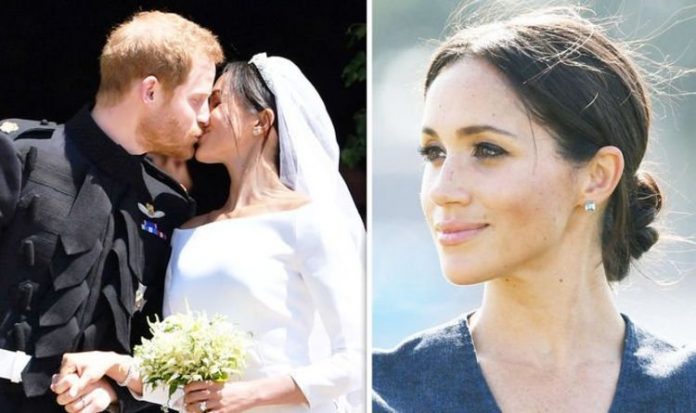 Ms Gibson fondly recalled getting a phone call for her vocal group to perform at Harry and Meghan’s 2018 nuptials.

She told The Standard that year: “I was on the number 87 bus… a woman said, ‘We’d like to invite you to sing at the royal wedding’.

Despite her surprise, Ms Gibson admitted she received a tip-off about an important call from a friend who worked at Clarence House – the official residence of Prince Charles and wife Camilla Parker Bowles.

She recalled the moment during AOL’s Build series, saying: “‘You’re going to get a call Karen but I can’t tell you what it’s about, but Karen it’s big!’ – that was the pre-call to the call.”

When Ms Gibson didn’t hear from anyone for “a few days”, she presumed her friend had been mistaken.

She said: “I thought the call would come that night or the next day but it didn’t, so I thought, ‘Ah it’s nothing’ – but then I got the call when I was on the bus!”

Ms Gibson claimed her choir had to make 12 changes to their version of Ben E. King’s 1961 song Stand By Me.

She claimed the royal couple didn’t hear the final version, which she described as their “most stripped back”, until the big day itself.

Ms Gibson said the original version was “pure gospel” and was “a very full-on sound”, which the choir typically would have performed.

She added: “Gospel music is all about the cherries on top and it’s not about stinting on anything.

“But we got word back that they wanted something a little less, so we did a second version which had an Etta James arrangement but again we had word back that it wasn’t right.”

Ms Gibson told Hello! in 2018 that the couple “hadn’t had time” to hear the last arrangement because they requested some “final tweaking” before the wedding

She said: “None of us were nervous on the day about performing but I was nervous as to whether this would be exactly what they wanted. It felt incredible on the day.”

Before their performances, Ms Gibson and her choir attended Kensington Palace for “tea and biscuits and a chat”.

She claimed to see “how very much in love they were” from how they “looked at each other” and how they listened to each other’s point of view.

Concerns about the choir’s arrangement wasn’t the only drama to unfold on the big day – after seven-year-old pageboy Brian Mulroney flashed a cheeky grin during the service.

The youngster’s amused expression, which some compared to a “royal photobomb”, went viral and was later explained to be because he had never heard a trumpet before.

His father Ben Mulroney, husband of one of Meghan’s close friends Jessica, told Canadian TV show Your Morning that they had no idea their son was an internet star.

Mr Mulroney said: “These kids are so young that there was a lot of worry that it wouldn’t get done right but they’re having so much fun with it – which to me was the thing that gave me such pride.

“We didn’t put so much pressure on them that this wasn’t joyful for them and it was pretty darn joyful.

“What a beautiful day…The kids had a chance to get to know each other a little bit during these rehearsals and had some get-togethers.”