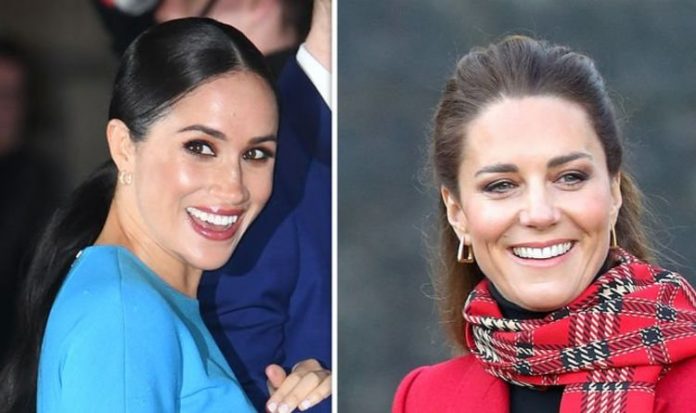 The Golden Ratio is an Ancient Greek theorem used to determine “physical perfection” by comparing the symmetry of facial features. Dr Julian De Silva, Head of the Centre For Advanced Facial Cosmetic & Plastic Surgery in London, ran Golden ratio analysis on some the most well-known royal women and found Meghan ranked higher than Kate.

On the Duchess of Sussex, Dr De Silva found she had a 87.7 percent rating on the Golden Ratio.

The cosmetic doctor highlighted the Duchess’ nose width and length as her best feature, with a rating of 98.5 percent.

He said to the Daily Mail Meghan stood out because of her “beautiful facial symmetry”.

He also said Meghan had gotten “closer than any other princess to having what the Greeks considered the perfect face”.

Kate on the other hand was given a 86.62 percent rating using Golden Ratio analysis, coming just behind Meghan.

The Duchess of Cambridge’s nose base and lip width was touted as her most symmetrical feature, with a rating of 91.9 percent.

Dr De Silva added she was still one of the most beautiful women in the world, and said: “Kate stands out for having a perfect gap between her nose and lips and very strong eye spacing.

“She was marked down for having a weaker chin and jawline than Diana.”

Both Meghan and Kate share the same face oil in their skincare routine, according to Leila Aalam, founder of Beauty Skincare.

Speaking to Harpers Bazaar in 2019, Ms Aalam claimed both the Duchesses use the company’s Beauty Sleep Elixir oil.

She said: “Our source at the palace confirms that they gave Kate the Beauty Sleep Elixir, which is regularly replenished on her dressing table.

“It was then reported that Kate was giving product to Meghan to use too, and now they both receive regular supplies.”

It comes as Meghan was ranked as the world’s most popular royal, just beating out Kate.

A survey from website OnBuy crowned the Duchess as the most popular out of the royal family with a score of 14.5 percent.

Kate ranked just behind Meghan with a score of 14.4 percent, with third place going to Queen Elizabeth II at 14.3 percent.