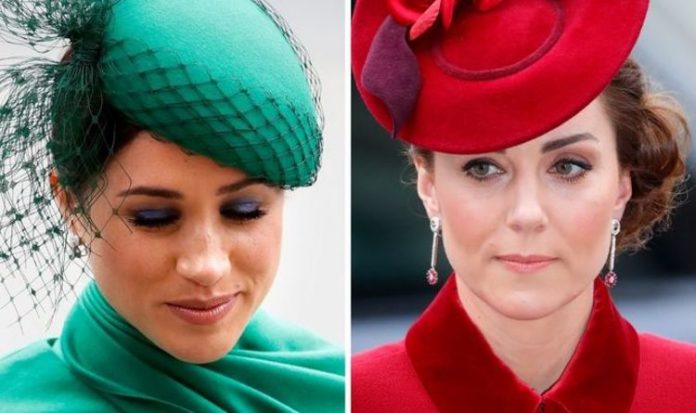 The Duchess of Sussex reportedly has a frosty relationship with the Duchess of Cambridge, while claims of a rift between their two husbands Prince Harry and Prince William continue to dominate Royal Family discussion. As a result of the biography Finding Freedom, it appeared Harry and William’s row began after the Duke of Cambridge made a “snobbish” remark regarding Meghan. This spiralled into a major fallout, as Harry and Meghan then made the bombshell move to stand down from their royal duties, to lead a “financially independent life” in the US.

But before they were officially stood down, the couple attended the Commonwealth Day service at Westminster Abbey, in which “no one around Meghan” smiled.

Body language expert Mollie Birney claimed Meghan offered an “absolutely unwavering smile throughout”, as she glanced at members of the Firm who were readying themselves for the procession.

It did look, Ms Birney suggested, “fairly forced”, as “it’s not a relaxed, authentic smile, it’s tense and forced”.

Kate’s attitude towards Meghan was equally cold, but the Duchess of Sussex “continued to smile, despite being ignored” by her sister-in-law.

Ms Birney added to The List: “Kate makes absolutely no effort to make eye contact with Meghan despite being well within her eye line.

“No one else around Meghan is smiling either, so it really does stand out.”

Since Megxit, the word used to describe Harry and Meghan’s departure from Royal Family life, historians and experts have drawn conclusions as to how, and when, the supposed feud between Harry and William, and their wives, began.

Others have argued that the row, particularly between Harry and William, started in 2016 – when the Duke of Sussex introduced Meghan to his brother, and sister-in-law.

Author Angela Levin wrote in her 2018 book Harry: Conversations with the Prince, that the resentment may have crept in before this, particularly when the pair schooled together at Eton College.

She said: “Harry did complain once or twice that William wasn’t there for him, but he might have been teasing.

“Even if it was true, William at 15 had barely any more experience of life than Harry did, despite spending years trying to be a parent to their mother.

“It was a grown-up’s job and someone should have picked up that he needed professional help.”

The Royal Family are set to spend their Christmases away from one another this year, as they continue to observe the strict coronavirus guidlines.

The Queen usually hosts members of the Windsor clan on her Sandringham Estate, but will enjoy a quiet with Christmas with Philip in London.