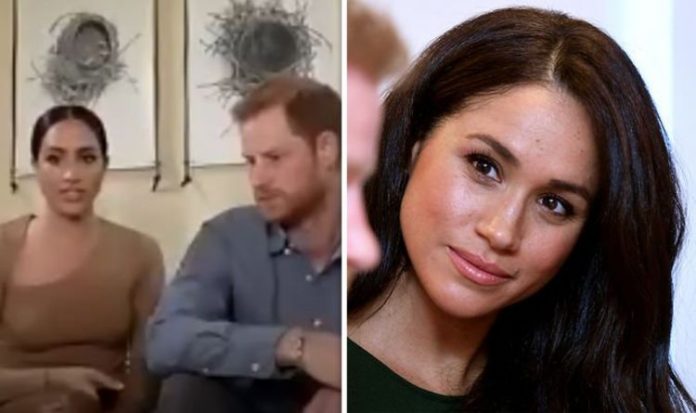 Prince Harry and Meghan discussed the BHM Next Gen Trailblazers’ list project they have launched to celebrate Black History Month in the UK in a new video from their Montecito home. The list recognises those who have challenged prejudice and who have made a positive contribution to British life. Meghan said in the video that she “didn’t realise” there was a Black History Month in the UK, yet just last year she wrote thank you letters to children who wrote to her to mark the event.

Meghan said: “Truth be told, and I was in the UK for a few years until we moved back here, I didn’t realise there was the Black History Month in Britain.

“And so to have that brought to our attention was really exciting from a standpoint of everything that’s going on in the world.

“But mostly because it’s about celebrating community and really you’re celebrating all the individuals who are making an incredible impact within our community, then what a great thing to be a part of.”

However, it is curious that Meghan would say she did not know there was a Black History Month when she responded to children’s letters last year on the subject.

Students of the Woodlands Community Primary School in Birkenhead wrote to the Duchess of Sussex last October and were lucky enough to receive a personal thank you note from her.

The school shared the letter they received from Buckingham Palace, dated November 11, 2019, along with a photo of students holding their personal thank you notes, on social media.

The school tweeted: “As part of our work on Black History Month, Year 3 / 4 wrote to HRH the Duchess of Sussex and posted a selection.

“Imagine our excitement when we received personal letters back from Buckingham Palace!”

He wrote: “Meghan told, with a wide-eyed gasp, that she had never realised that Britain might have a Black History Month. A mistake.

“The first Black History Month was launched in 1987. For at least two decades it has been officially celebrated by British governments of every stripe, and marked by members of the Royal Family.

“Meghan simply reminded us how little she learnt about Britain and, in particular, that she was unaware of the one moment in the year when Black Britain is acknowledged by Establishment Britain.”

Meanwhile, former royal correspondent at , Charlie Rae, said the letters were evidence Meghan knew “full well” there was a Black History Month in the UK.

He even accused the Duchess of “using it for her own ends”.

In their video, Meghan and Harry also addressed the issue of “structural racism” that they said holds back people of colour in the UK.

“This is just about using this opportunity, this month to introduce Brits to other Brits that they might not know about or might not have heard about that.

“And I think the power of community that comes from that is absolutely vast, especially for young black men and young black girls.”