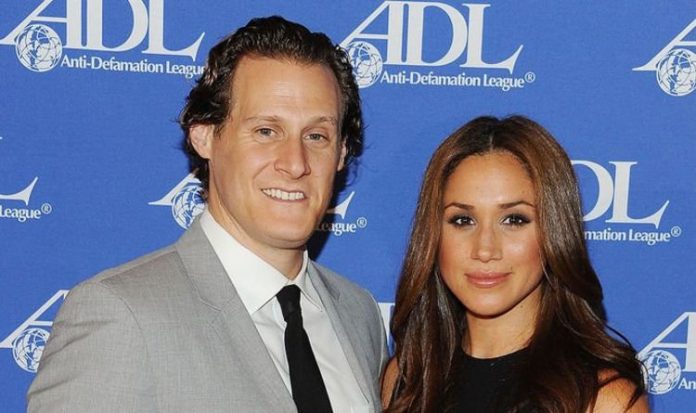 Before the Duchess of Sussex met Prince Harry, she was married to Hollywood producer and talent agent Trevor Engelson. However, their relationship started to deteriorate after Meghan moved from their home in Los Angeles to Toronto, Canada to film Suits. It was a major breakthrough in her career to play a leading role in the hit TV legal drama, but so much time apart hurt their relationship.

According to the book ‘Meghan: A Hollywood Princess’, it was Meghan who decided to end the relationship and her decision took Trevor by surprise.

One friend told author Andrew Morton that Meghan had actually sent her wedding rings back to Trevor in the post.

Mr Morton wrote: “A wealthy interrupteur friend claimed that the marriage ended so abruptly that Meghan sent Trevor her diamond wedding and engagement rings back to him by registered mail.

“Another confirmed that the decision to end the marriage was made by Meghan and that it came totally out of the blue.”

Meghan’s brother Thomas Markle Jnr confirmed that Meghan sent her rings back in the post in an interview with Express.co.uk last year.

Mr Morton added that everyone in Meghan and Trevor’s circle of friends were “genuinely shocked”, as were his parents who had “embraced her like a daughter”, according to one of Meghan’s family members.

Trevor himself was so taken aback that the normally laid-back New Yorker would switch to a “cold fury” if anyone mentioned his ex-wife.

Ninaki Priddy, Meghan’s former best friend and maid of honour at her wedding to Trevor, told Rebecca Hardy that Trevor had been taken so off guard that even five years after it happened he could “barely contain his anger”.

She added that Trevor had “the rug pulled out from under him” and was left “hurt”.

The couple had first met in West Hollywood in 2004, lived together in Los Angeles and married in 2011.

Their ceremony had been in sunny Jamaica surrounded by friends and family.

However, they divorced in 2013 citing irreconcilable differences.

Meghan went on to date restaurateur Cory Vitielli for two years before meeting Prince Harry on a blind date in London in 2016.

They were married in May 2018, becoming the Duke and Duchess of Sussex, and had their first child together, Archie, in 2019.

The couple stepped down as senior royals in March 2020, moved back to California, and are now expecting their second child.

Trevor and Tracey married in Montecito in 2019, not far from where the Sussexes now live.

Meghan: A Hollywood Princess was written by Andrew Morton and published by Michael O’Mara in 2018. It is available here.