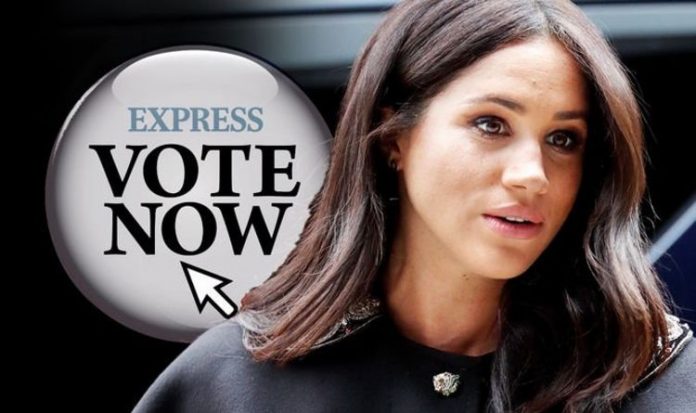 Meghan Markle, a former US actress, became the Duchess of Sussex in May 2018 after she tied the knot with Prince Harry, who is sixth in line to the throne. But after the couple’s sensational decision to quit the Firm, Meghan is still officially called Her Royal Highness the Duchess of Sussex, Countess Dumbarton and Baroness Kilkeel.

Express.co.uk is asking you should Meghan,39, be stripped of her royal title?

Prince Harry and Meghan Markle, who are now living in Santa Barbara, California with their 17-month-old son Archie Harrison, have stopped using the His and Her Royal Highnesses (HRH) styles since withdrawing from their royal jobs, but have so far been able to keep all their official titles.

It comes after speculation the Sussexes could be forced to give up their title after they were accused of “interfering” in American politics when they waded into the debate about the US elections.

Republican congressman Jason Smith of Missouri claimed the Duke and Duchess of Sussex were using their voices to influence American voters.

The Duchess called the election the “most important election of our lifetime”, while Harry urged people to “reject hate speech”.

The Queen acts on behalf of the Government, and if she was asked to strip her grandson and his wife of their titles, she would have to seriously consider the request.

He wrote: “As you know, the British Royal Family has long observed a policy of strict neutrality in regard to political matters.

“I am therefore concerned by the Duke and Duchess of Sussex’s recent comments regarding the United States Presidential Election, especially given international conversations surrounding foreign interference in our elections and the Duke’s status as a guest of the United State.

“It is my view the titles and privileges they retain by permission of Her Majesty the Queen, given with the advice and consent of her Government, prevent the Duke and Duchess from separating comments made in a personal capacity from their official position within the British Royal Family.”

Kathy Ellis, who is running to represent Missouri’s 8th Congressional District in the House of Representatives, wrote on Twitter: “In the last hour, we’ve received calls from people all across the country who are deeply concerned about Jason Smith’s comments RE: Meghan Markle, and his singling out of her specifically, as a woman of colour.

“Let me say clearly: his comments are totally unacceptable.

“As an American citizen, Markle certainly has the right to encourage people to vote and to ‘reject hate, misinformation’.

“Smith should focus on some of the issues impacting his constituents, instead of this nonsense.”